This wedding came about due to a request for a Celebrant which was posted on our Celebrant Forum as there were no local Celebrants available to assist this couple (or rather Eilidh’s mum who had made the request hoping to find someone).  After offering my services, I received a very nice email in which you could sense their relief they had potentially found someone.  After a phone call we arranged to meet when I was in their area conducting another wedding.  Even after meeting me, they still wanted to go ahead.
The venue was the Ghillie Dhu which is just off the tram works/Princes Street, Edinburgh.  My first stroke of luck was as I approached, a young lady was leaving in her car so I was able to find a parking space right outside – no mean feat.
On entering the venue, it was large, very nice, almost Bavarian beer festival in style but the wedding was to take place in the auditorium which was up a couple of flights of stairs.  My only concern was the limited light as it is lit by chandeliers.  To say it is an amazing sight is to understate it, it is spectacular.  As everyone entered you could see their breath taken away which was repeated as the bride entered. 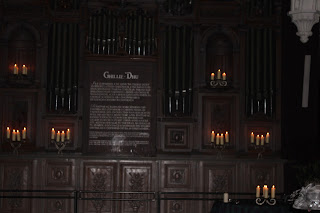 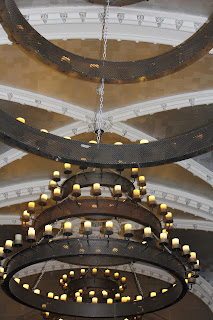 During the ceremony, Martin lit a candle in honour of his late father and Eilidh and he read some poetry, one very romantic and the other funny.  It is quite common for me to ask the guests to repeat after me, a Celtic blessing for the bride and groom but they wished to turn this round and I gave the assembled guests a “Celtic Rune of Hospitality” instead. 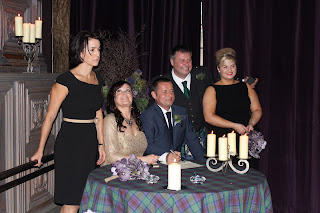 Mingling with the guests after the ceremony, some wished to discover more about the various ceremonies and it is interesting that some of the males thought they would consider renewing their vows but their partners shot them down.  Ouch!!
Posted by George at 11:59 No comments:

I received my first contact with them when shopping at Costco when Royan telephoned me having seen my profile on the HSS web site.  He asked if I would marry them at the Craiglynne Hotel, Grantown-on-Spey.  I did point out that I have a colleague who lives in Grantown-on-Spey but Louise wished to be married by a male – for which I’m qualified!!
While drafting the ceremony together, both were quite nervous about speaking so where they had their personal and legal vows we made them as much as possible to be “I do” answers.  As they have been together for a number of years and have children, they wished to incorporate a candle ceremony involving not only them but their children.  Initially they lit their individual candles, to signify their separate individuality.  After we completed their personal vows which included a commitment to the children and  we signed the marriage schedule, the four children then lit their individually named candles.  Royan and Louise then completed the candle ceremony by lighting their “main” candle using the flames from their individual candles to signify their strength as a couple and their commitment to their children. 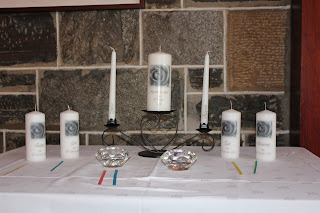 When I arrived at the venue, I must admit I did not get the impression they were nervous.  Bear in mind, this was about half an hour before the marriage was due to take place and both were in the hotel lobby greeting their friends and guests in their ordinary clothes.  After sorting out the paperwork, both retired to change and I waited as further guests arrived.  There was then an appearance of doubt that the wedding would start on time.  The best man having been repeatedly instructed by his wife to prepare eventually decided to get dressed and found he had left his shirt back in Tomintoul.  An usher was sent off to the local kilt hire shop for a shirt but its lunch is 1 to 2. Not good for a 2pm wedding.  Fortunately the assistant arrived early and we had a shirt.  During the ceremony as he handed over the wedding rings, I was able to compliment him on having them – good job they weren’t with your shirt.  Everybody had a good laugh and he took it in good spirit. 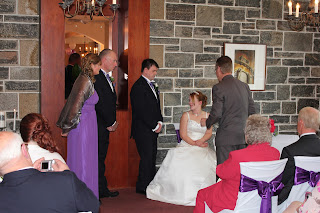 After the wedding everyone retired to the gardens for the photos.  Again many positive remarks about the wedding. 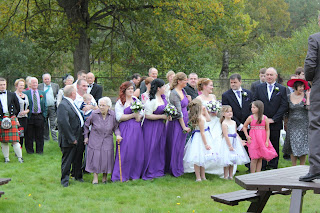 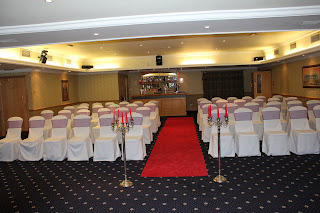 This was a wedding at the Grange Manor Hotel, Grangemouth which is very close to where my daughter stays, so I was delighted to be asked to conduct their ceremony.  Neither are quite in the first flush of youth, shall I say and they opted for a very traditional style wedding.  Bert especially was very nervous, prior to the wedding and as we waited for Babs to arrive, he was getting more nervous. 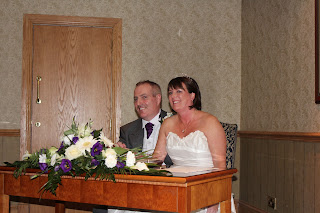 The ceremony include a ring warming and well wishing verse involving their guests and several humorous poems read by friends.  Babs nine year old nephew was charged with polishing the rings after they had been handled by all the guests – well you know how dirty they can get!  The guests really got involved in the ceremony which was greatly appreciated by Babs and Bert who had worried about this before the event.  The warmth and laughter coming through from their guests helped them both keep their nerves intact. 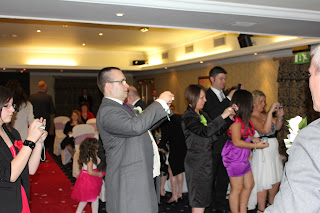 The one constant memory I have of this wedding is Bert’s face, with his big smile, as Babs came down the aisle.
Posted by George at 11:26 No comments:


I first met Hannah and Martin at their home which is very close to the wedding venue, the Royal Botanical Gardens in Edinburgh.  They loved spending time in the gardens reading, one a good book and the other a trashy magazine, I’m told.  It was after Martin had proposed that they visited the gardens in late autumn and the colours and light were everything, Hannah has always dreamed of in an autumnal wedding, with orange leaved trees, crisp blue skies etc. so they chose it as their venue.  No prizes for guessing that this year’s weather the gardens were not quite in that order but still magical. 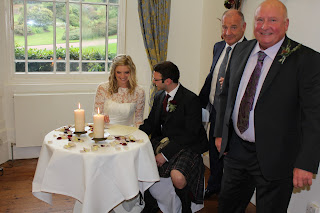 I have to admit I have never been at the gardens and when I was approaching the entrance, I was carefully checking where I could park.  I was very fortunate to find a space just at the entrance so I did not have to carry all my chattels very far or so I thought.  The actual venue in one of the halls was a good five to ten minute walk from the main entrance.  Again the weather precluded an outside wedding but as the guests arrived their spirits were very high.
Hannah and Martin wished their guests involved in their wedding and we had three readings from friends as well as a ring warming.  They chose a candle ceremony to be symbolic of their joining. 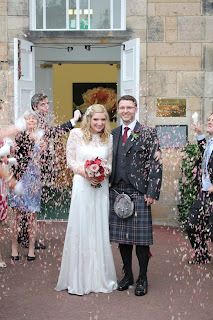 After the ceremony, while photos were being taken (the rain held off – just) the guests and I adjourned to the reception at the gateway by the entrance.  A number of the guests quizzed me about Humanist weddings and one girl had been so enamoured with the personal nature of the ceremony, she was going to propose to her partner.  She felt they would love a small wedding on a beach so I’m free!!!
The feedback from all who spoke with me was very positive.  There was one couple who had been married in a Humanist ceremony by another Celebrant, who were very complimentary – phew – what would I have done if they said I was rubbish!!!
Posted by George at 11:11 No comments:


Louisa and Alastair are a very active couple who met through Alastair’s sister.  What began with fifty odd mile cycle run in poor weather became a journey over many a hill walk, cycle and general outdoor pursuits.  So it was no surprise that they chose the outdoor activity centre at Gartmore Lodge near Aberfolye as the setting for their wedding.
They had hoped for an outdoor wedding but as far too often this alleged summer, the weather did not play its part and we held the wedding in the main hall which is itself very nice with lovely views over the hills. 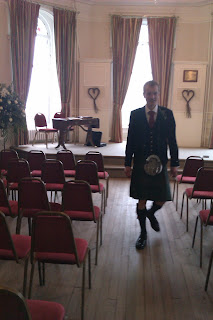 Louisa left the lodge and did a circuit of it in an old Bentley so as “to arrive” at the venue.  She joined Alastair and I on the stage.  The wedding included their story and a hand fasting. They used climbing rope for the bonds which was very appropriate  although I did mention that if they found themselves a metre short at anytime, they would know the culprits.  While they were bound together I gave them the cards on which their personal vows  were contained.  While they were saying those to each other, their nerves were beginning to show and some tears began to flow.  Each was dabbing the eyes of the other to the accompaniment of  ”Aahs!!” from their guests.  I had to explain that it was very hot up on the stage which brought a lot of laughter and helped them to compose themselves enough to complete the ceremony.  (They had written their own vows which were very personal and meaningful hence the tears of joy). 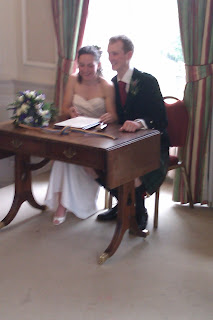 Again many guests had not been at a Humanist wedding and the comments were very positive.
Posted by George at 11:03 No comments: