Kerry and Simon's wedding was held at her family home, Ardgye House, Alves which is normally a B&B.  Kerry wished to be married in the garden but the weather was not looking to play its part and initially the seats were set up in the hall at this allowed the bride to come down the lovely wooden staircase. (The drawing room is also lovely for a small initmate wedding)  Ten minutes before the scheduled start the weather appeared to offer a window of opportunity so all guests helped move the seating outside. 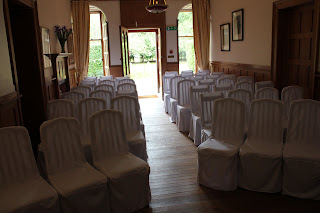 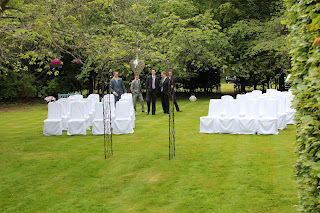 During the ceremony several of their friends read poems and they included, as their symbolic gesture, placing letters to each other about what it is they love about the other, along with a bottle of wine, into a box to be opened on their tenth wedding anniversay. 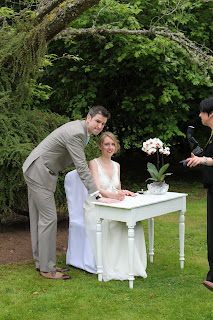 After we had signed the marriage schedule a helicopter from the Air Sea Rescue at RAF Lossiemouth flew by.  Apparently no one had asked it to do so but maybe they saw the wedding and were just taking a look - whatever, their timing was immaculate.  After the wedding, as usual, there were a number of photos taken but then the bride and groom disappeared for a few moments before re-appearing....... 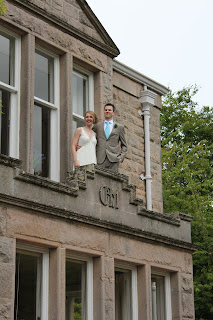 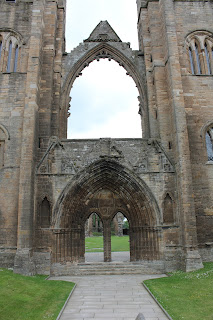 This was a truly international wedding held at Elgin Cathedral, an Historic Scotland property dating from the 13th century.  Heather and Edwin live in Calgary, Canada and were looking for a special place to hold their wedding.  When they learned that Heather's sister and brother-in-law, who are domiciled in Australia, were to be touring Scotland, they saw an opportunity to have that special wedding and have their family present.  Being foreign nationals they had some extra paper work to fill in, but that did not put them off. 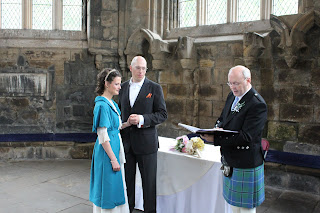 The final icing on their wedding day cake came when Edwin's father, who is in poor health, managed to make the trip from the south of France with his wife to join the other four at the ceremony.  They chose to celebrate their nuptuals by drinking from a Quaich - the traditional Scots two-handed drinking cup - also known as a loving cup.  The wine came from the region of France where Edwin's folks stay and all present were invited to drink from it and toast the happy couple. 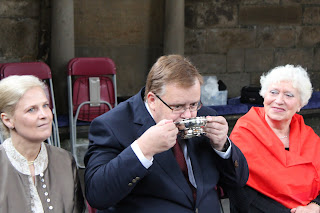 To round off their wedding, my friend, Robbie Innes, the Piper, played them down the aisle with the Canadian National anthem which he had transposed for the bagpipes.  This brought further tears of joy to the happy couple.  Robbie is very good at trying to find the music a couple want and is seldom beaten.  He also took these photos on my behalf.

During the wedding which, due to the weather, was held in the Chapter House (which has a roof), we were observed by two bus loads of German tourists who were obviously delighted to see two men in kilts and to witness the wedding (Historic Scotland do not close their attractions for a wedding).  As I said - a truly International Wedding

The Official Photographer, Iain Bain, has now uploader some of his photos to his blog.  They look great and give a feel of the location and the style of the couple.

http://iainbainblog.com/elgin-wedding-photographer-canadians-in-the-cathedral
Posted by George at 19:59 No comments:

It was an absolute delight to take over this naming ceremony when one of my colleauges had to pull out a few weeks beforehand .  Fiona is the second child of Shona and Simon.  When their eldest son was one they had a naming ceremony and birthday party for him and they wished to do the same for Fiona on her 1st birthday.


It was held at the Quay Complex, Musselburgh.  To help keep the other youngsters amused they had set up a play area behind the seats with what appeared to be gym/obstacle course style games.  It was well used by the children before and after the ceremony.

Both Shona and Simon had written special prose for the occasion and, despite being a little emotional, were able to say the words beautifully.  Simon convinced his friend Nick to be a Guide Parent and even say a few words - knowing how much this terrifies him.   I thought he said he was his friend. 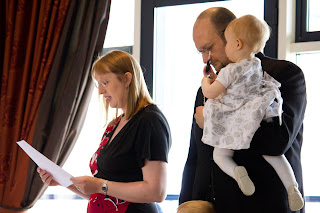 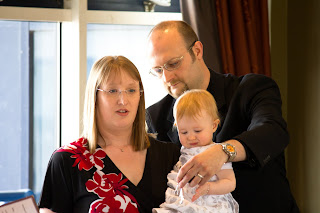 Fiona took being in the limelight and being spoken about and hugged in her stride.  Everyone was there to welcome Fiona to the family and wish her well.
Posted by George at 20:22 No comments: 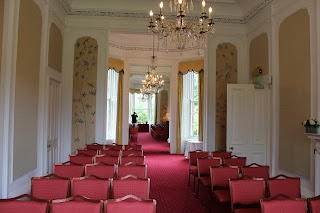