For their wedding, Claire and Alan had chosen the setting of the splendid and newly restored Castle Fraser near Inverurie.  It was a beautiful day and as I arrived, I encountered a number of guests who had arrived before me.  For one heart stopping moment I thought I must have made an error about the time of the wedding and I was late, but no!  I was right on schedule and the guests were just taking the opportunity to admire the beautiful building and gardens beforehand. 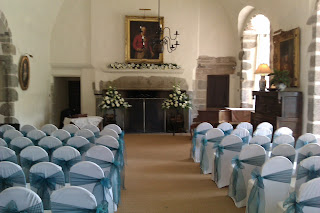 One thing that National Trust for Scotland properties are highly praised for is their tea rooms – but what comes in for even higher praise is the scones they serve in those tea rooms!  So, as it was a lunchtime wedding, I managed to fit in a cup of tea and a scone before the wedding started.  Good planning, eh?  (Just had to be very careful about the jam!)

During the wedding we told the story of how the couple met, of an almost disastrous first date but mostly of how their love for each other has grown since then.  They had opted to include hand-fasting in the ceremony, during which they said their personal vows to each other.  Alan's sister then read the passage "These are the hands" before the legal vows and exchange of rings.  After the signing of the Marriage Schedule, Claire's brother read the poem “Our Great Adventure" by Steven Reiser. 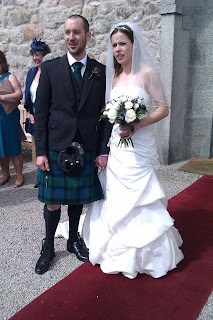 After we closed the ceremony, it was off to have photos taken by Paul Mackie who skilfully used the four old Rolls Royce's' that had brought the wedding party to the location, as a backdrop.  He had to stand on the roof of his Ute vehicle to manage this feat.  He appears one of these photographers who go that bit extra to get "that picture".  (www.paulmackiephotography.co.uk) (These are my phone photos as I forgot my own camera)

It was during this activity that I not only ran into the son of very good friends of mine, but also met two more of Claire and Alan’s friends, who just happen to work with my daughter and son-in-law in Grangemouth.  It's a small world. 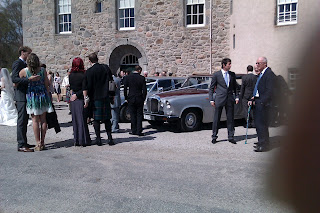 My abiding memory of the day will be the smile on both the bride and groom especially knowing how nervous he was before we started.

Again many guests sought me out to congratulate me on a lovely, personal wedding ceremony which was just "them".  Well they do the hard part, I just put it together hopefully in a manner which they and everyone will enjoy.

This was my first wedding this year and definitely the first couple from Kazakhstan I have married.  Well, that’s not quite what it seems - they were originally from Nairn! While neither is in the first flush of youth, they were childhood sweethearts when they attended Nairn Academy a few years ago.  Unfortunately, circumstances intervened and saw them part, but chance came back into play some three decades later and they were reunited. 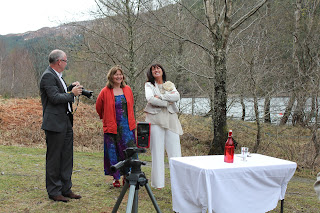 The wedding location was to be on the shores of Loch Meig in Strathconnon, Ross-shire.  All the work in drawing up the wedding ceremony itself had been conducted by email and the script had been finalised.  However, when I first met them on the Sunday prior to their Friday wedding, they had yet to pick the exact spot for the ceremony and were planning a reconnaissance trip around the shoreline on Tuesday before choosing the perfect setting.  The area holds special memories for them and together, within its tranquil and beautiful scenery, they experience a feeling of being spiritually connected; of being at one with nature.

On the day of the wedding, the wedding party, guests and I, were to assemble at Muir of Ord before travelling in convoy to the location. Some eleven miles later, we arrived, having driven over the River Orrin which is co-incidentally named after my new grandson!.  All the way to Muir of Ord and then on to Loch Meig, it had been raining hard.  As we drew up it stopped and we were able to scramble down and set everything up for the wedding by the shore. 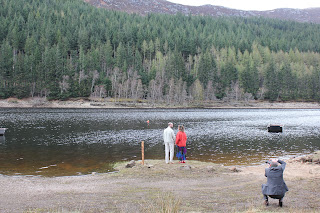 The ceremony was a very traditional affair - apart from the sharing of water from Loch Meig, rather than the amber nectar normally seen on such occasions.  The ceremony over, Jaqueline and Cameron managed to pose for a number of photos before we headed back to the cars.  As we were doing this, there came the gentle patter of raindrops and, just as we finished stowing the wedding table and the last of the chairs back in the cars, the pitter-patter became a hammering deluge. 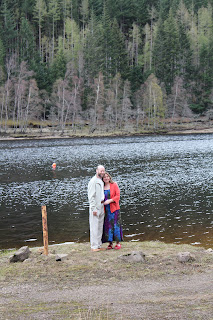 It was a beautiful location for a lovely couple.  The ceremony was the first Humanist one many of the family and guests had ever encountered, but all thoroughly enjoyed it, saying how very personal and appropriate it was to Jaqueline and Cameron.