This wedding began in slightly differently from most in that I originally only met with Laura as Colin was unavailable.  Due to her own work schedule it was difficult to actually find a time for the meeting, but that is a problem that seems to be happening more frequently these days. 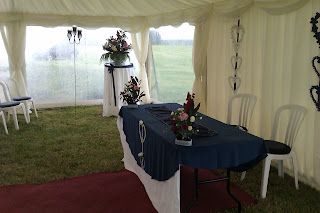 Initially their plan was to marry at the Mosset in Forres but due to the time needed to turn around the entertainment suite into a reception room after the wedding, this was not going to be possible and they switched the ceremony venue to a marquee in the garden of her uncle's home in Nairn.

I set off for the wedding armed with the directions for getting there, as well as having programmed the satnav (not so easy in the new car).  I found the turn off and then started looking for the venue.  I headed out of Nairn through Kingsteps (that was fine, included on the instructions) for what seemed like an age, then, just as I was looking for place to turn around, feeling sure I had missed the venue, I saw a marquee in the distance.  We were by now a good three miles out of Nairn.  As I closed in on the marquee, signs began to appear, Laura and Colin's wedding - success I was there!

I had just done getting everything set up when Colin arrived.  One marriage schedule check later and we were good to go.  The marquee was a bit chilly but as the guests began arriving, it soon heated up so my going from having blue fingers to a leaking forehead was accomplished quite quickly.  Unfortunately, the weather did not play ball and it was a damp afternoon as Laura arrived. 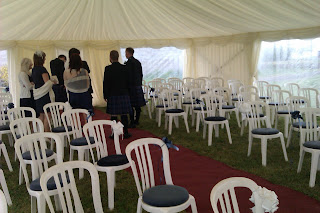 The ceremony involved several readings and Laura's uncle read "Marriage Fulfils the Dreams and Love Two People Share" by Glenda Wilm.  I then tied the two of them up as they exchanged their personal vows.  The wedding concluded with a suitable ending and I sent them off down the aisle with instructions to take their time, as so many rush this part.  By now, it was raining and they headed off to her uncle's home for the photographs as they could not be taken outside.

The timescale being tight, the guests all headed for the bus or their cars to make the journey to the reception at the Mosset.  This meant I had little opportunity to mingle with them and obtain some feedback on the ceremony.  Those that did take a moment to talk to me commented very highly on the personal nature of the ceremony and how much they had enjoyed it.

The venue for Catriona and Peter’s wedding was the Chapter House at the beautiful Elgin Cathedral and, surprise , surprise, it was not raining!  Two Saturdays in a row, and no rain!  What is the world coming to? 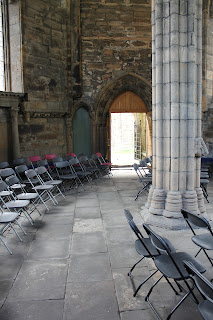 The one problem with the Chapter House is that massive pillar which supports the remarkable ceiling.  The layout of the seating usually means that not all the guests have a full view of the ceremony but this time, due to the numbers attending, Peter, his assistants and I did our best to move the chairs around so that everyone could see the marriage take place. 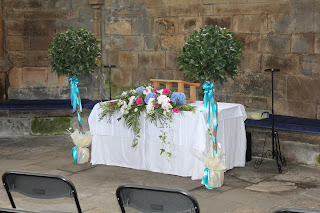 Catriona and Peter were quite concerned their wedding might be too long and though it actually ended up being one of my shorter ones, it was still very personal and meaningful and struck a chord with the many guests.

I think the guests enjoyed hearing the story of how the couple had first met.  Peter, still feeling very under the weather due to his previous night’s exploits, had to be pretty much dragged to a party by his friends, with the promise of a smashing girl from the Highlands being there.  After the party, Catriona told her friends that she had found "The One".  It never ceases to amaze me, when the couples I marry tell me about their first meeting, how often coincidence and just pure chance is involved in their ever getting together at all! 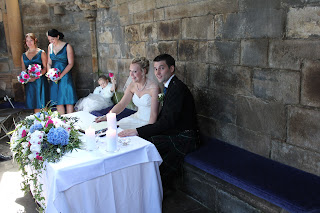 After the ceremony, the guests adjourned to the courtyard where champagne and strawberries were served while the photographs were being taken and before they headed off for the reception.

I received a lovely card from them, with the two of them gazing into the others eyes on the beach (still in their wedding outfits) with "Thank You" written in the sand.  It said, "Dear George, We just wanted to say a huge thanks for your fantastic service for our wedding.  We really enjoyed it and found it very personal and special.  So many of our guests also came to us and complimented the service"

The photographs with the couple and me, myself for the ring warming and the candle lighting courtesy of Steven Seymour, Parallel 57   www.parallel57.com
Posted by George at 16:16 No comments:

This was both a long distance, yet a very local wedding.  Let me explain.  Jill and Fraser, although both originally come from and met locally, were living in Perth, Western Australia when they contacted me regarding their wedding.  It was their intention to marry at Gordon Castle, Fochabers, which is only 2 miles from where I stay. 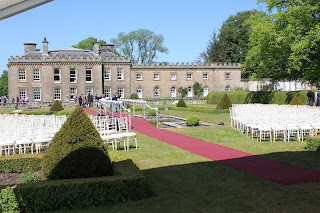 Initially we exchanged emails but I was able to meet Jill when she returned home for a brief holiday.  Surprisingly, even after meeting me, they decided to book me as their Celebrant.  Over the months since then, they designed their ceremony but even when they were returning to the UK, where they will remain, the script was not finalised.

We met up as they were setting out the wedding venue on the Thursday afternoon and were able to almost complete the tasks involved before we had a rehearsal. 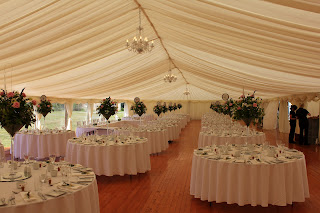 On the Saturday afternoon all their efforts to arrange the venue were helped by one of the best days of the year so far.  Gordon Castle is just dipping its toes into becoming a wedding venue but it could become the "must have" venue in Moray although I doubt they will often see what Jill and Fraser had for their wedding.  To begin with the marquee was unbelievably big – roughly, it seemed, about the length of a football pitch – draped with swags and adorned with chandeliers.  The wedding itself was outside where the bridal party were sheltered from the baking sun by a permanent canopy as we face towards the house.  Jill's father had built a bridge over the large pond which was now bedecked with flowers and the obligatory red carpet. 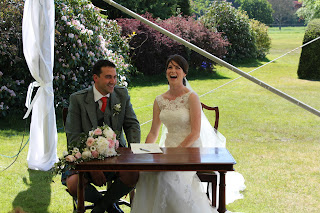 The string quartet played as we awaited the bride and her father, who followed the flower girl and bridesmaids across the bridge.  One of the readings used in the wedding was written by Jill's great grandfather over one hundred years ago to his bride and the words were still very relevant today.  After speaking about how they cemented their relationship while castrating and dehorning cattle (both are vets) I read "thoughts in a Garden" by R Gerhardt before we exchanged their vows and exchanged rings.  Another friend then read one of Jill's favourite poems, Robert Louis Stevenson's "I will make you brooches." The bride and groom then made their way back over the bridge, stopping in the middle for some photos. Other highlights of the wedding were Jill's mum primary school choir singing, the Moray string quartet and a jazz band playing as the guests were sampling some champagne while the photos were taken.  I'm sure they appreciated that as they were in full sunlight throughout. 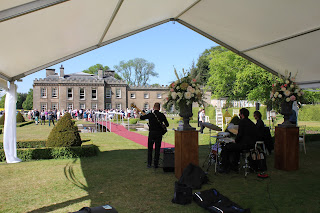 All in all, a quite spectacular venue and wedding.  Mingling with the guests afterwards, for many it was their first experience of a Humanist wedding which they found very personal and deeply meaningful.  Everyone said how much they enjoyed it

This lovely couple’s wedding took place in the recently restored Callendar House, which is in Callendar Park, Falkirk.  The ceremony was held in a wonderful room on the first floor, overlooking the pond and garden. 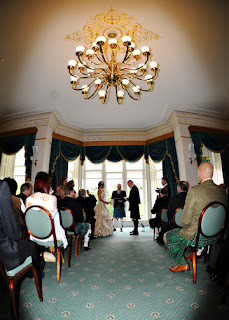 After the initial welcome of their guests, they placed a rose each onto two empty chairs to honour Stephen's mum, who died when he was very young, and his gran who died fairly recently but who had been so looking forward to their wedding.  I have to say, it was a very touching moment. 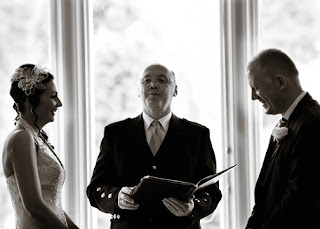 They had met at work and it wasn’t long before they began to realise they had feelings for each other.  They have very realistic views on marriage and there were several readings, including one by Joanna's brother who read, "Oh the Places you'll go" by Dr Seuss.  The works of Dr Seuss seem quite popular for readings at weddings although I must confess, before I started conducting ceremonies I was less familiar with the books than with Dr Seuss Land at Universal Studios in Orlando, Florida!!. 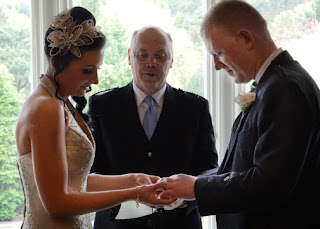 A traditional hand fast preceded the legal vows and only after the exchange of rings did they make their personal vows.  The ceremony concluded with a Celtic Blessing from the guests to the bride and groom for their future happiness.

After I sent them off as husband and wife, they exited the room via a beautiful external stairway to the ground level where a lot of photographs were taken!

It was one of the very few fine days we have experienced this year, so I hope their photographs have come out well.   I think they have!! 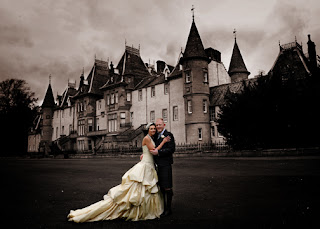