This was quite a difficult but very positive wedding ceremony which may very well seem a strange introduction but let me explain.  Both served in the armed forces and were deployed over various parts of the world whilst trying to draw all the many strands which comprise a wedding together.  Although both are English they had met and fallen in love not only in Scotland but with Scotland so wished their wedding to be here.  While Jemma enjoys her tom boy activities she has a very strong girly side which came to the surface when they found their perfect venue, Bunchrew House, Inverness which is PINK. 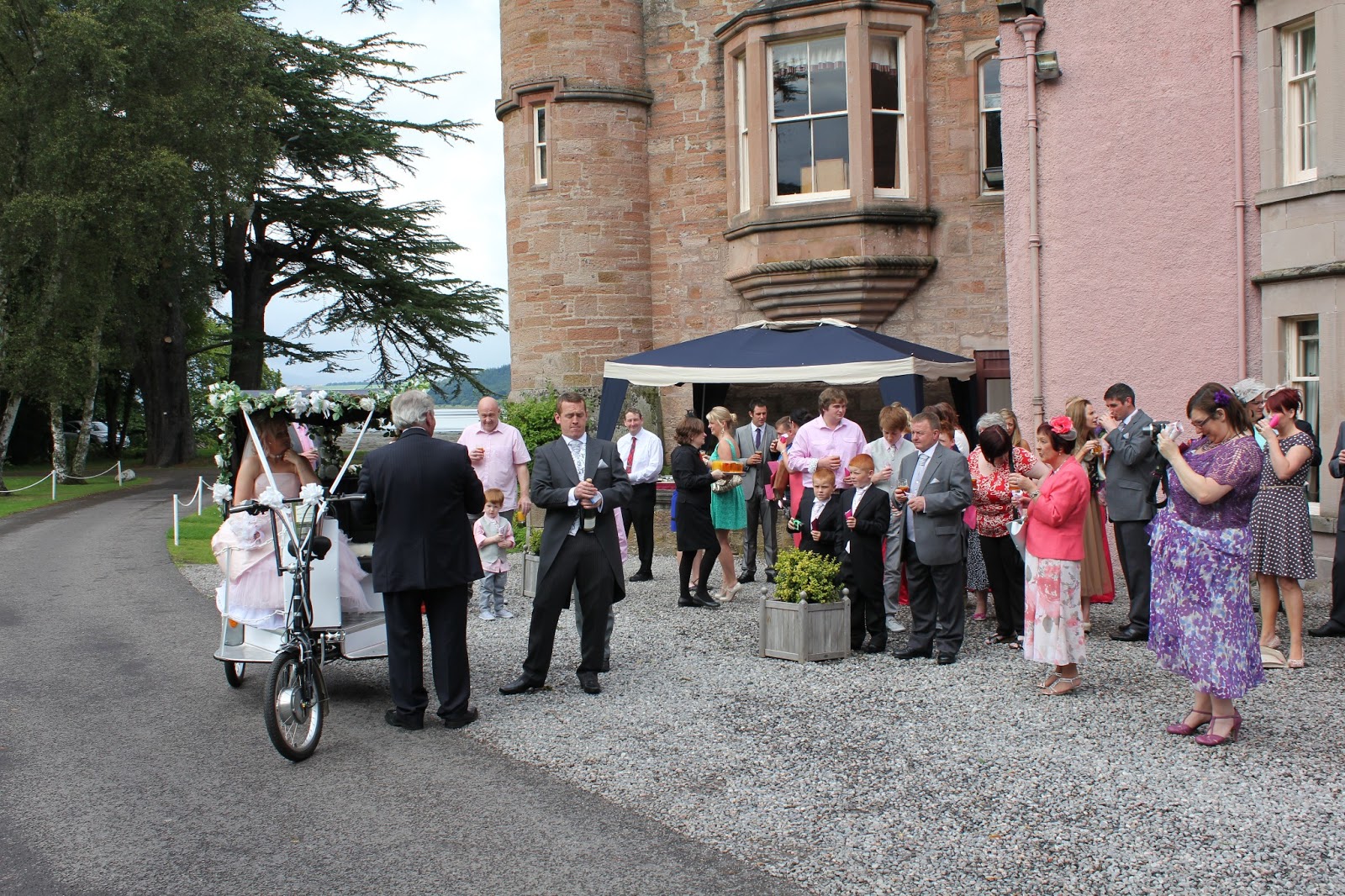 Now I actually thought they had chosen a Humanist wedding ceremony because of ME!   They had been doing the rounds at a wedding fair when I managed to catch their attention and introduced the thought of a Humanist ceremony to them.  After giving it some consideration they decided it gave them the opportunity to have the wedding they wished so as they say the rest is history.  From the very first meeting we had they wished their wedding ceremony to involve their guests which they did but what struck me most were their personal wedding vows.  While they were a mix of traditional and personal - about their love, they also included fun parts that reflected their personalities.  All I will say is that Tony's ended with "You have the right to remain silent!" 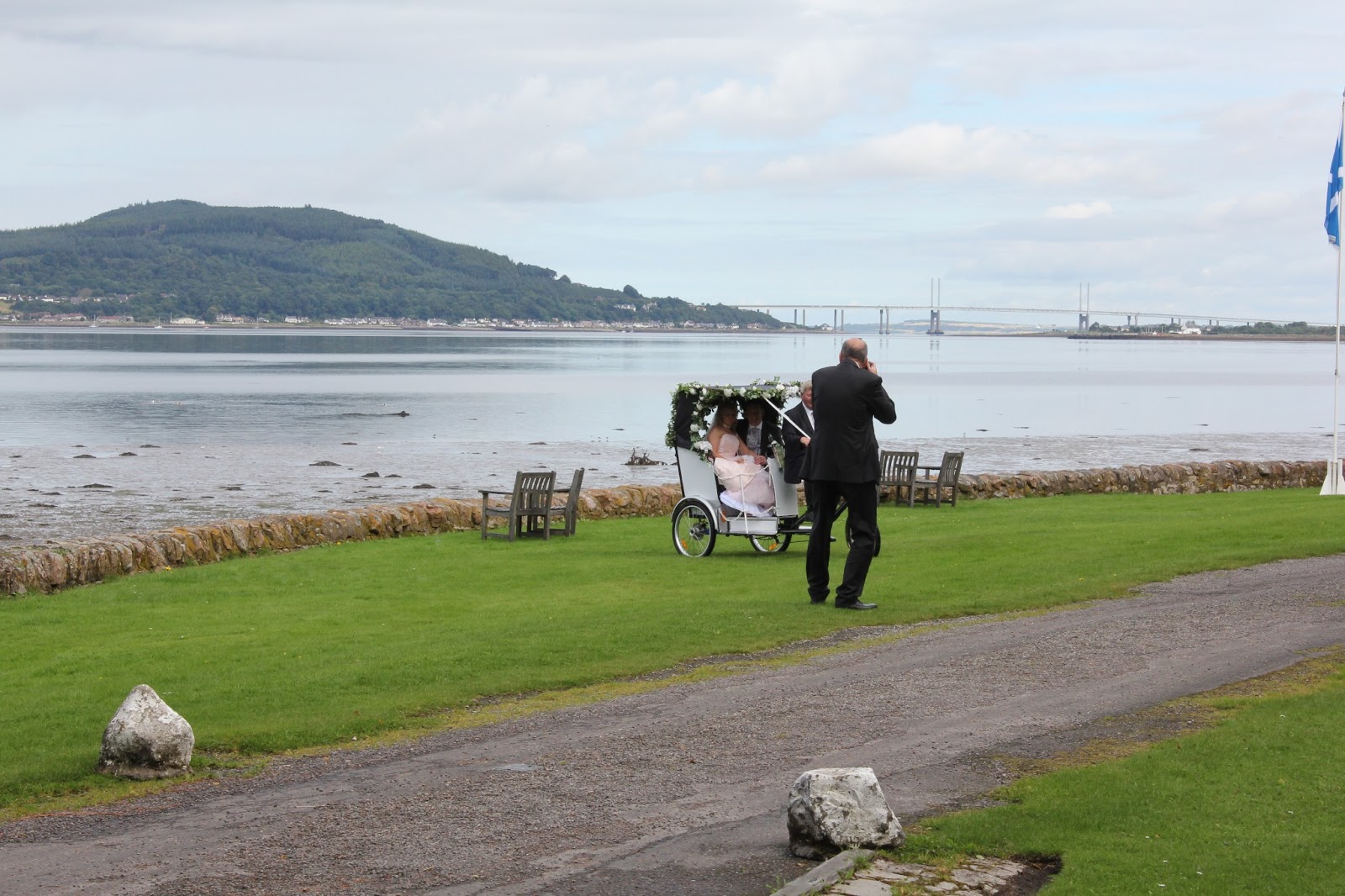 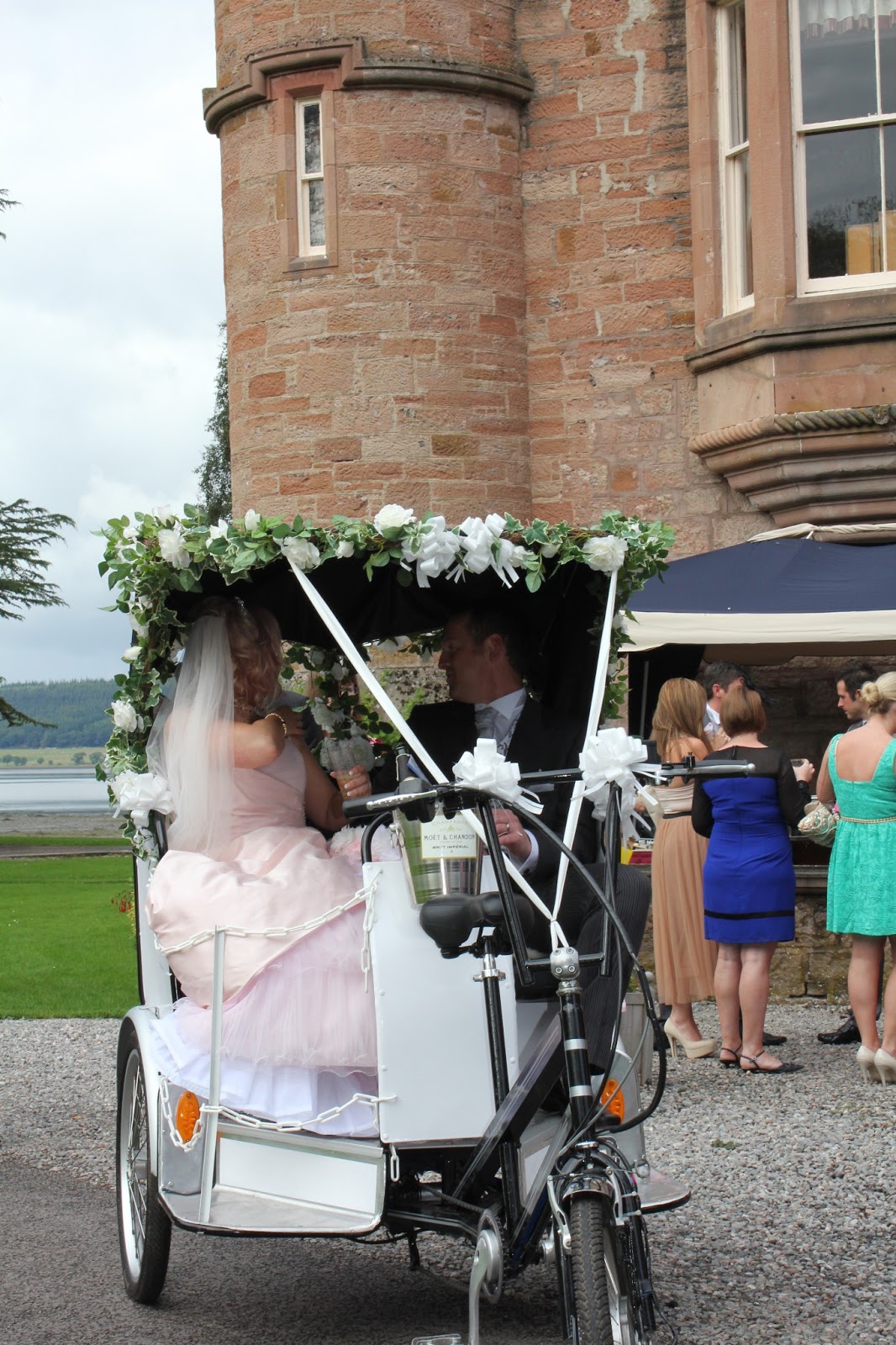 After the ceremony many of their friends made a point of coming up to me and congratulating me on a ceremony which fitted Jemma and Tony to a "T" and was the most fun they had had at a wedding.  From Jemma's Facebook pages, they are having a ball and still very deeply in love.

The previous blog you will have noticed I struggled not to call the the couple Rick Shaw but on this occasion, the wedding transport was a Rickshaw - cool and very fitting.

For Tanya and Rick, the most difficult part of their wedding was finding a date.  Not because the wedding venues were full but due to the lack of appropriate dates between Rick's sporting seasons.  Indeed up until their honeymoon they had never had a warm climate holiday but as Rick kept the honeymoon destination a secret, it may still be they haven't had a warm holiday.

The choice of venue was hopefully to be outdoors and on the beautiful old bridge at Craigellachie with the local hotel on standby.  On the day it was absolutely beautiful, just like the bride.  Tanya and Rick had found the poem "Marriage Is For Life, Not Just The Wedding Day" by Denise Jones which was read by their friend Jen. 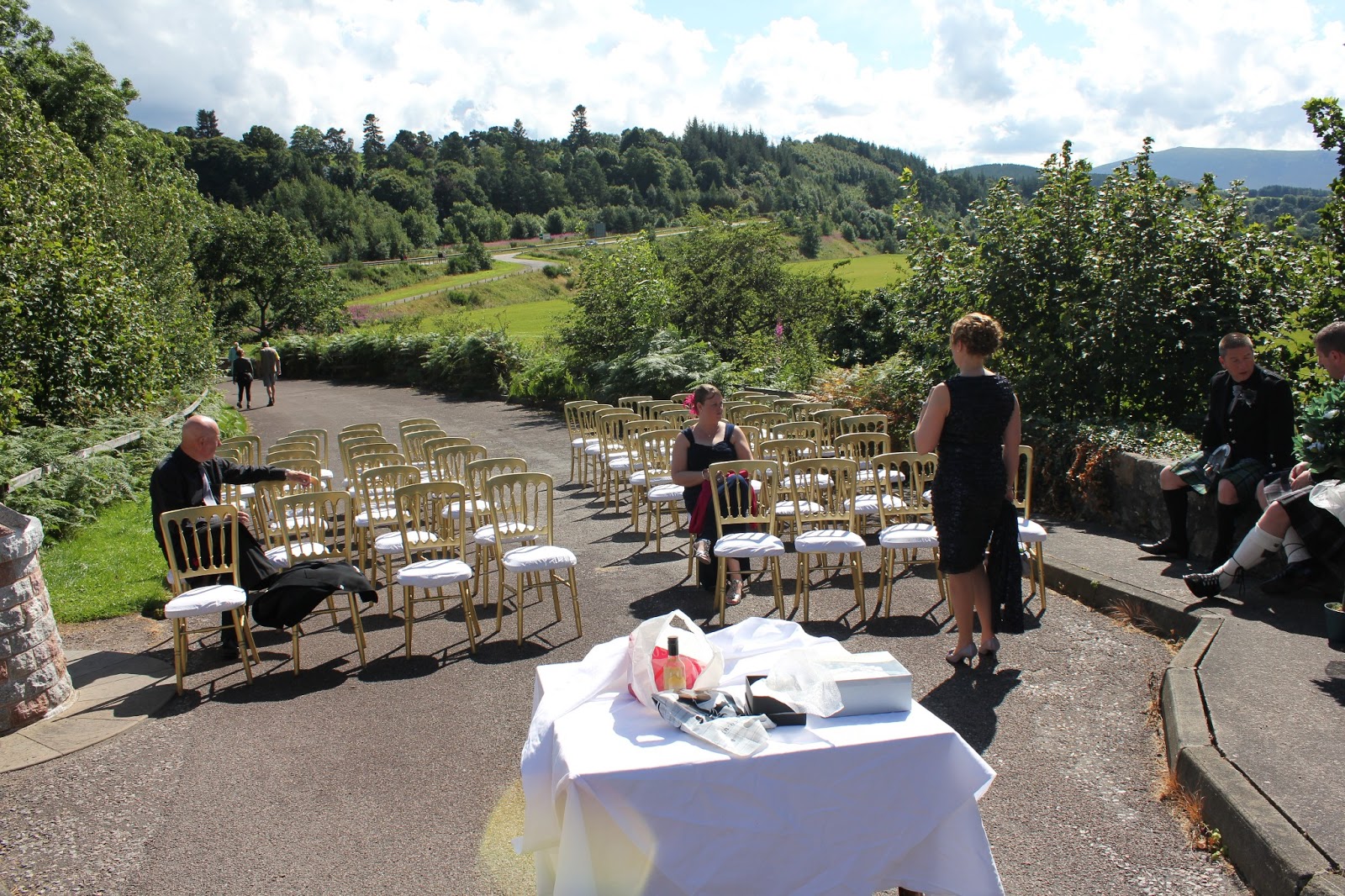 Girls, you have to work hard at being wed,
It's not just about what you do in bed!
You have to compromise in this life,
From wife to husband and husband to wife.

He isn't perfect (they never are!)
He'll cherish you less than he does his new car.
He won't do the dishes or pick up his smalls,
He'll belch and fart and scratch his balls.

He won't give you flowers or take you out,
Still drinks with his mates, what's that all about?
But don't constantly shout, give him a break,
Just go with the flow, you must give and take. 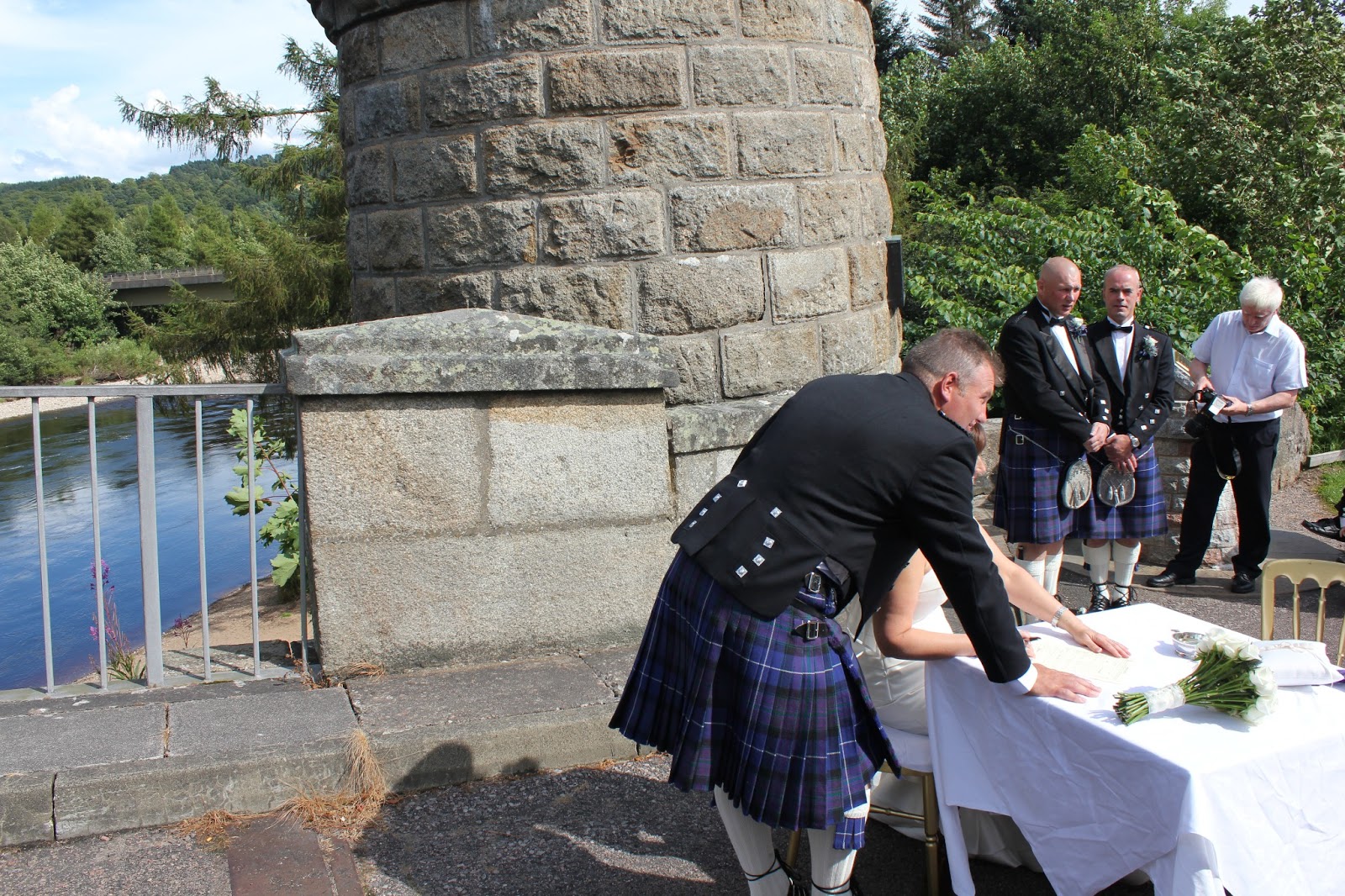 Cause you're no saint either, just remember that
You won't change the wheel when the tyre's flat.
'I've just done my nails', he'll hear you sigh,
Then you'll render him speechless with a little cry.

And girls when you argue, fight and scrap,
Just remember why you married your lovely chap.
Your knees still go weak when he cracks a smile,
He's your Mr Wonderful, wins hands down by a mile!

So remember to always have a laugh together,
To face challenges head on whatever the weather.
Talk and talk and talk some more,
Make home your sanctuary, behind that front door

For forty long years I've now been wed,
But I wouldn't change a thing it has to be said.

There's been pain and heartache, dark moments and all,
But we've come through it together and we're still having a ball."


This theme of including their guests in the marriage ceremony was continued when we closed the ceremony with a Celtic Blessing for their future happiness.  I just had to be very careful introducing them as husband and wife as I could not get the idea of saying they had their own transport to the reception, Mr & Mrs (Rick ) Shaw out of my head.  Fortunately my professionalism came to my rescue and they headed off down the bridge towards the waiting car.

Hi George Just a quick line to thank you from myself and Tanya, the ceremony was very special and the census of opinion was that everyone enjoyed it.
I must apologise that we never had more time to speak after the ceremony but things got quite hectic. So thanks again for helping to make a very special day all the more memorable 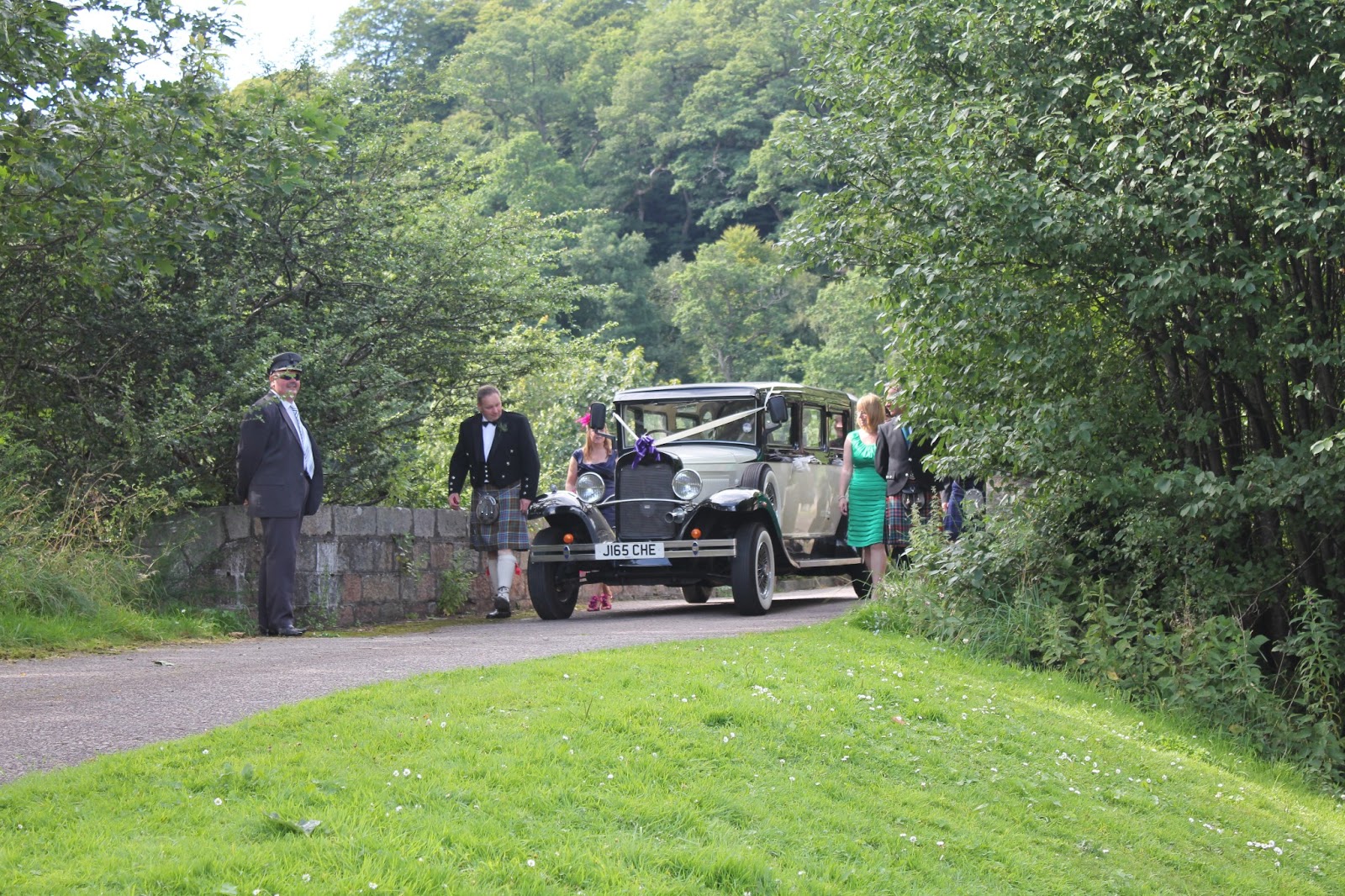 This was my very first wedding at Innes House on the outskirts of Lhanbryde so I appreciated the opportunity the day before as Laura and Stuart were setting up for their big day to meet up with them and go through their ceremony in the actual location.  Both wanted their wedding to be outdoors in the lovely garden but the weather forecast was not so good.  While the main room is very nice there was no doubt that being outside in the gardens would be better. 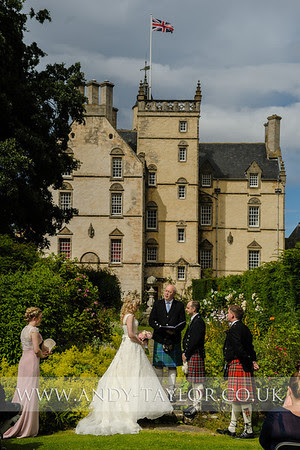 On the day, while the sky was black all around, there was a lovely oasis of sun situated on the garden so we went ahead with the outside wedding.  Fashionably fifteen minutes late, Laura appeared from behind the large rear wall, through the gate and entered the garden.  Laura had decided not to use the bridge to cross the pond in case she lost her footing so was piped around it as she was led by her father, to meet with Stuart and I.    All was going well, until we started to sign the marriage schedule when some large drops of rain began falling.  I thought if only she had been on time - hint to other outdoor brides - we would have been finished.  Mark the owner and piper, took me to one side and said, "If I had been a minister he would have believed I had a direct line to God as it was bucketing down(edited words) both behind the rear wall and in front of the house."   Our oasis of sunshine held on however so that we were able to enjoy the drinks and photos within the garden.  When I was finished I had to run to my car to avoid being soaked - should have stayed in the garden!
http://andytaylor.smugmug.com/Weddings/Laura/i-TD34mj5/0/M/ATP1248-M.jpg
Posted by George at 16:43 No comments:

Jodie and Calum had sought me out to conduct their wedding as like Calum, I was a Police Officer .  It was held at the Seamill Hydro, near Largs in Ayrshire which is quite a distance from the north of Scotland  so I decided to make a weekend of it to visit some of the historical venues in the area.  Both Jodie and Calum had spent many a happy day in their childhood visiting the beach at Seamill and it was because of this joint love of the area they picked the hotel. 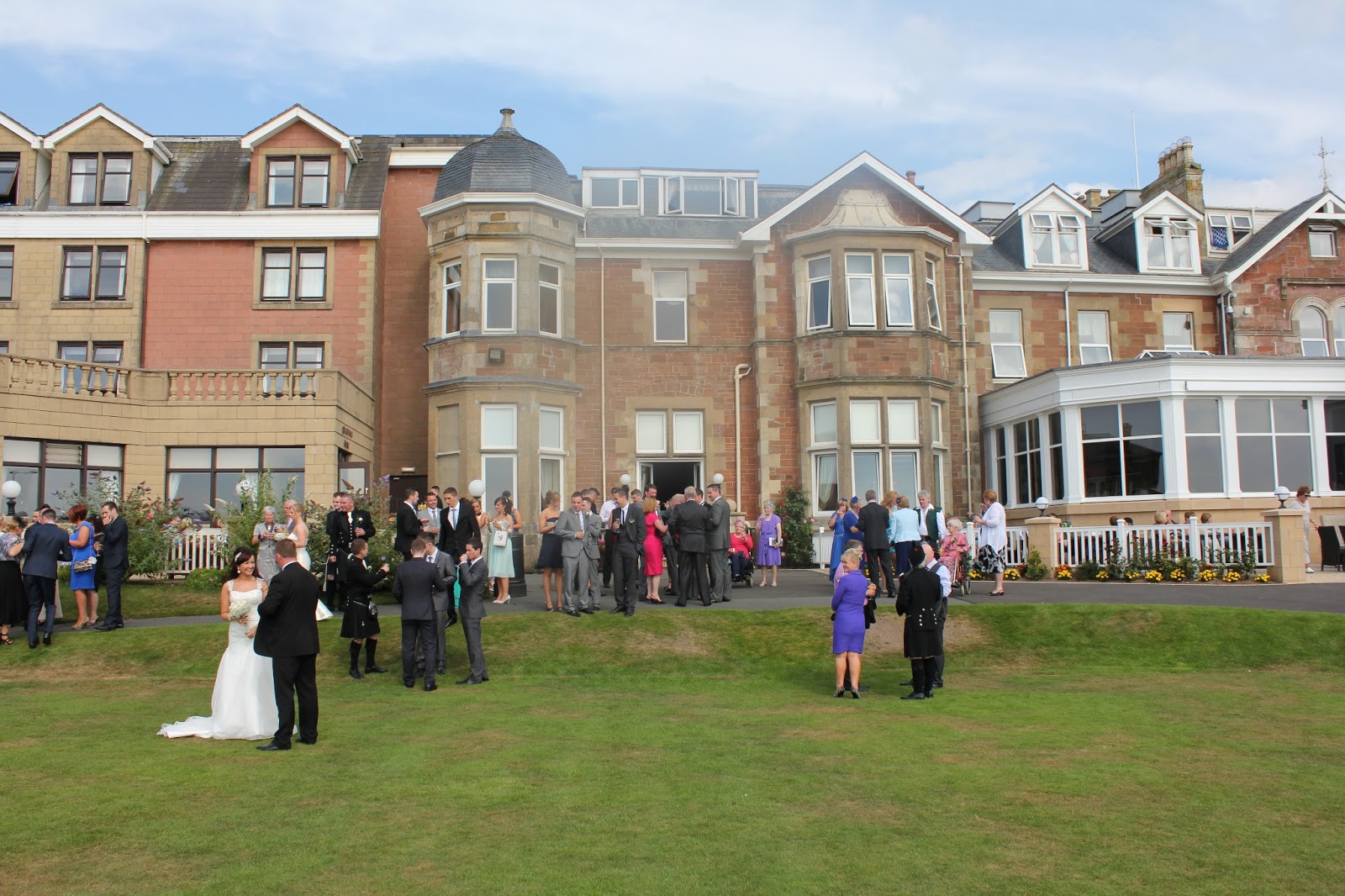 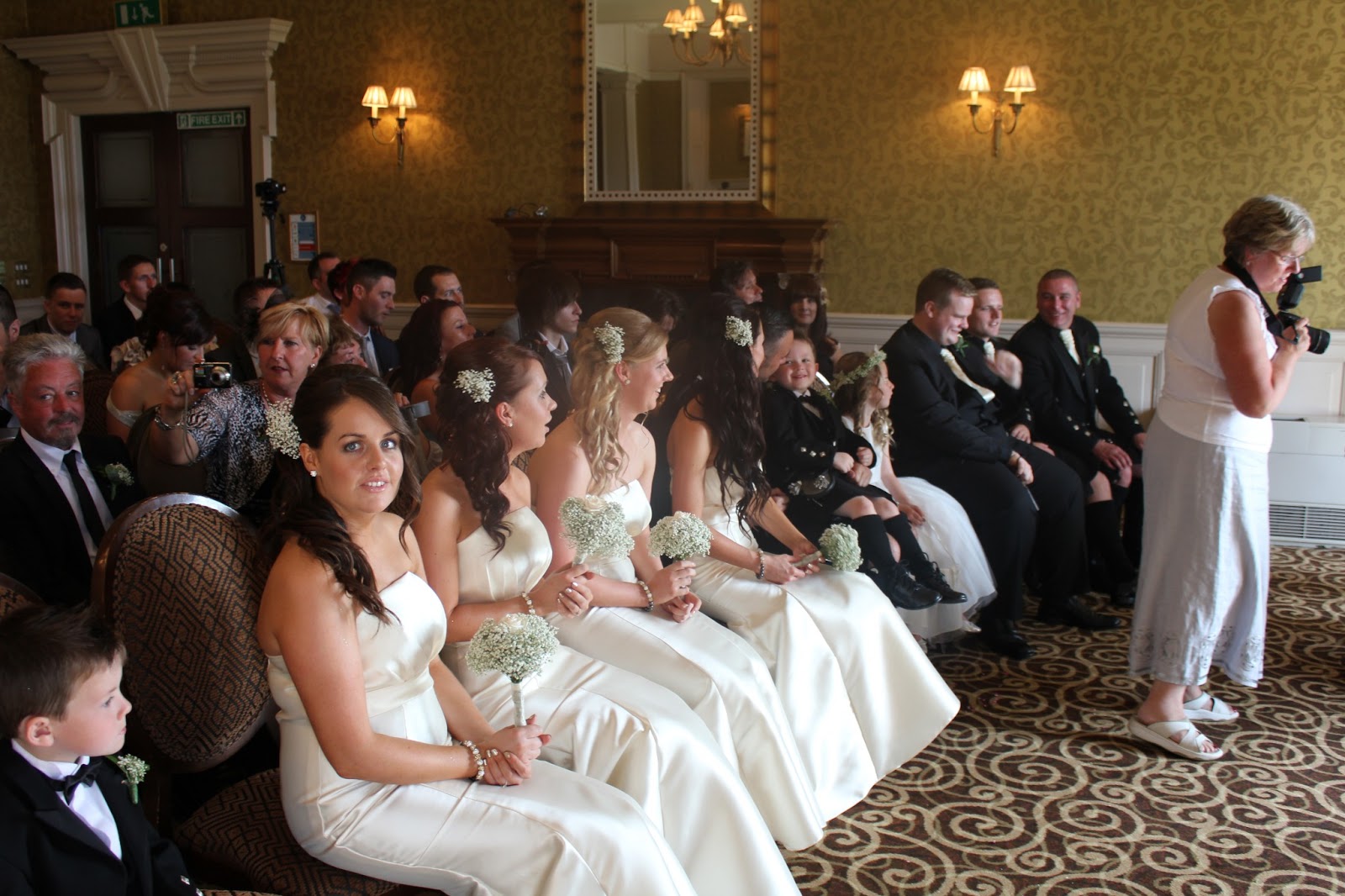 On my arrival on a glorious day, the wedding was set up in the main function room overlooking the garden/beach area.  Whilst we had thought of maybe holding the wedding ceremony in the garden, due to the amount of persons in the hotel restaurant and bar which overlooks the gardens, this could have proved boisterous so we remained in the room.  Whilst the guests had the lovely view past us to the gardens through the large French doors, Jodie, Calum and I were being toasted by the sun.  Full Highland regalia in the sun means sweat running from my brow into my eyes.

As if the heat was not quite high enough, they chose a candle ceremony to symbolise their union!!

Calum and I would like to thank you for being our celebrant on Sat 11th at the Seamill Hydro. Your warmth and humour was commented on several times by our guests and our families. You were a part of our start as a married couple and we are both happy you were.