This was a very special wedding for two main reasons.  Firstly it also involved a family ceremony for their two children, the youngest of which had almost thrown a very large spanner in the works by severely injuring a finger just a few weeks before the wedding was due to take place with most of Julia's family about to travel from new Zealand.  Secondly, there was to be equal tribute paid to the heritage of both the bride and groom.
They chose Boath House Hotel at Nairn for their venue which is a small intimate hotel which they adore and was suitable for the numbers able to attend.  Julia's family are friends with the New Zealand Maori author Witi Ihimaera who, as a surprise, adapted an extract from his book "the Rope of Man"  which fitted Julia's family story to a "T".  It was read by her mother.  As French martinis had played a large part in their first and subsequent meetings it will be no surprise to learn that they included a Quaich ceremony  as well.

The family ceremony part was enjoyed by both sets of grandparents and the guests as Julia and Gregg made commitments for their childrens lives in the future which they will have to strive hard to achieve but knowing them, I'm sure they will.

The only downside was that I forgot my camera.  However they and their family enjoyed the ceremony which is all I can ask for.

We just wanted to thank you very much for carrying out our wedding and naming for Annabelle and Monty.
What a perfect day and we really appreciate all the work you put into making it a special ceremony. You delivered exactly as we wanted and everyone was full of praise for such a perfect ceremony.

Thanks also for our keepsake of the wedding. Great to have it all there for the future. We are so happy to have got married and to have chosen both Humanism and you to do this.  Many thanks and best wishes for Christmas and the new year.

This was held at beautiful Aswanley outside of Huntly which is a lovely location.  However the weather for a December wedding might not be capable of showing the venue in its best light.  On the morning of the wedding after some very heavy snowfall, over a 100 tons of snow had to be cleared from the driveway to allow guests and more importantly our bride and groom (okay me as well as without me there is no legal bit) 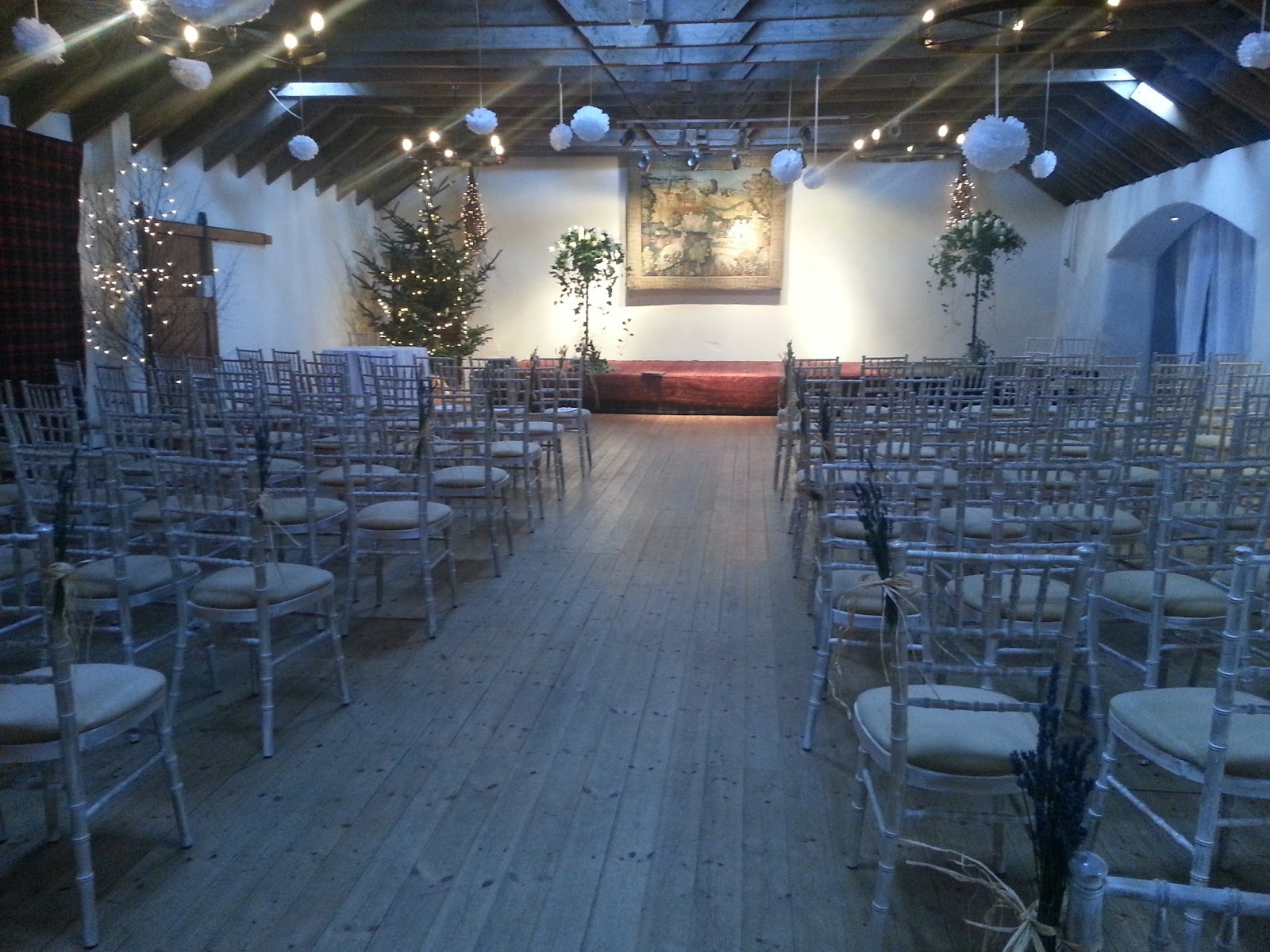 Amongst the symbolic gestures they chose for the day, drinking from the Quaich, the two handled Scot's loving cup which is said to originate from when a Scot's King gave it to his Scandinavian Queen which was most appropriate as Jennifer was born in Norway.  They also had a number of friends read poems during the ceremony. 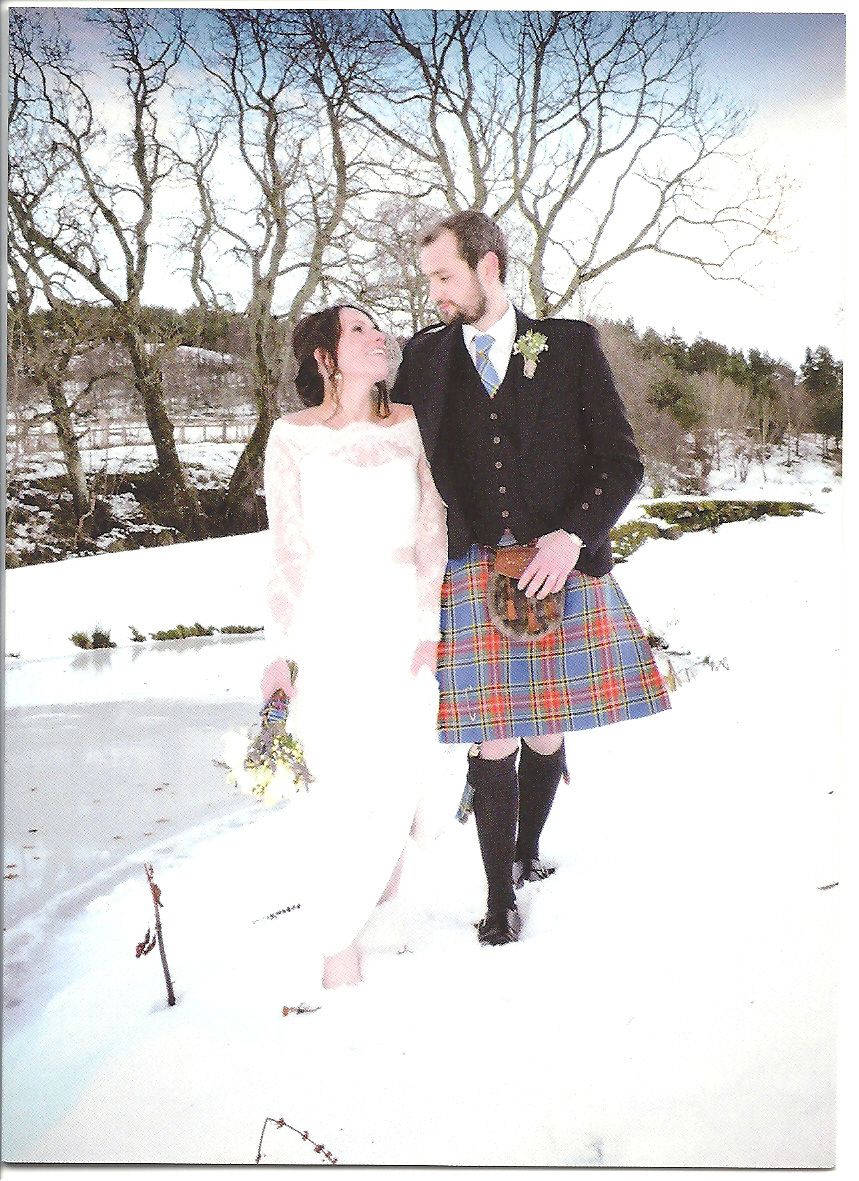 "Dear George, We would like to thank you for conducting our wedding ceremony.  We loved the service and many people also commented on how personal and wonderful it was.  You were so helpful and kind in the run up to the wedding.  We both really appreciate the effort you put in to make it so memorable."
Posted by George at 16:49 No comments: 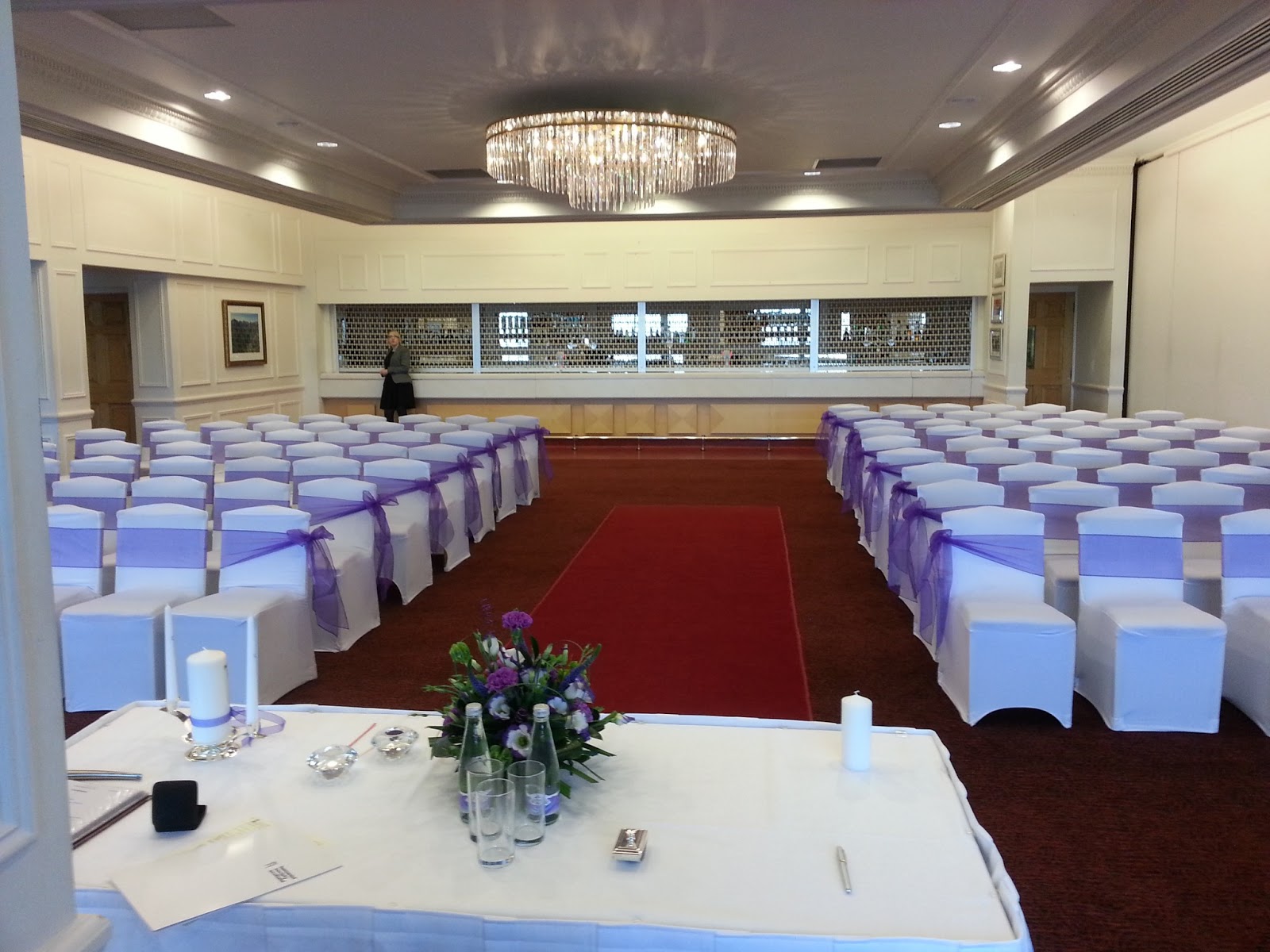 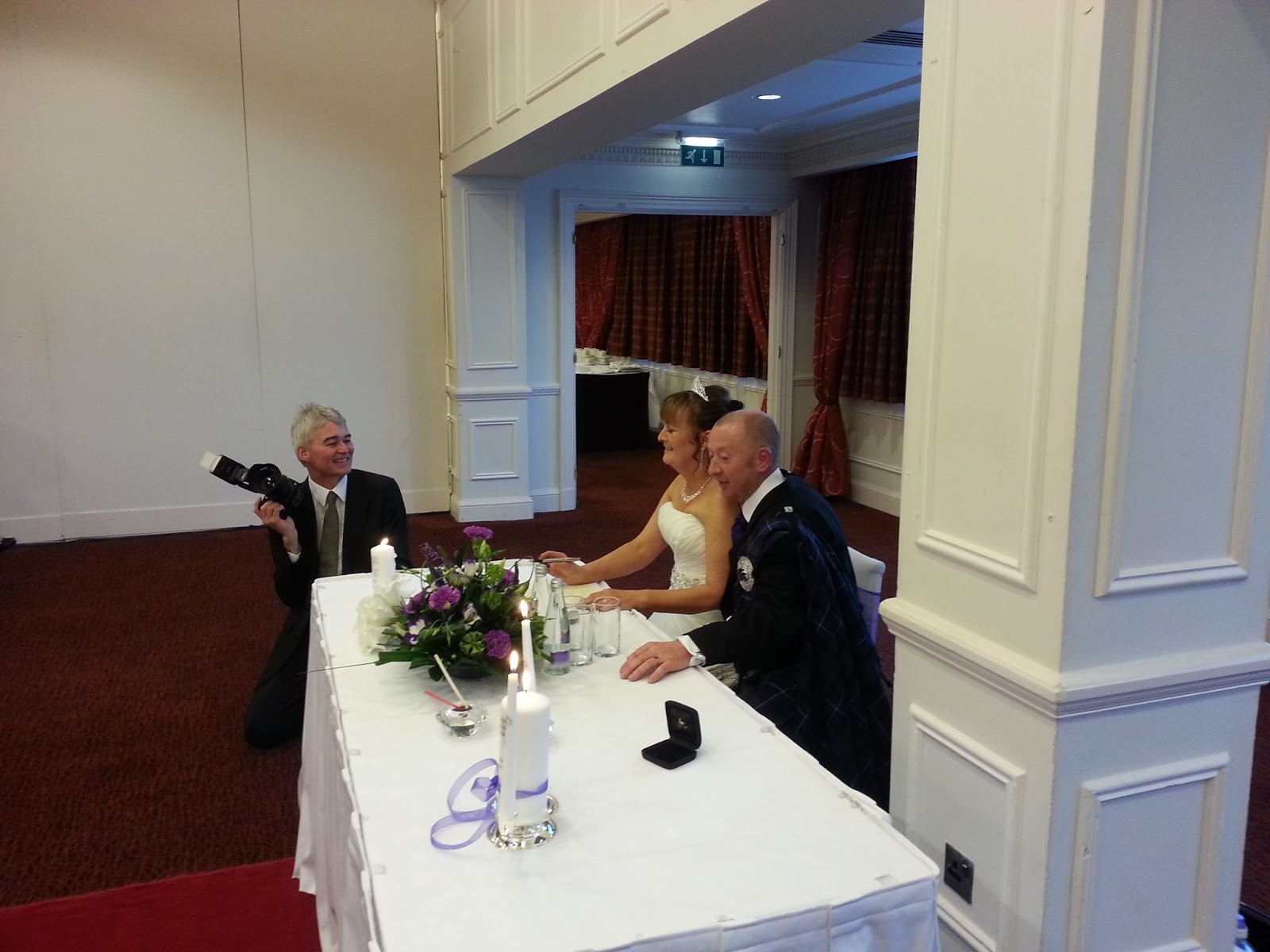 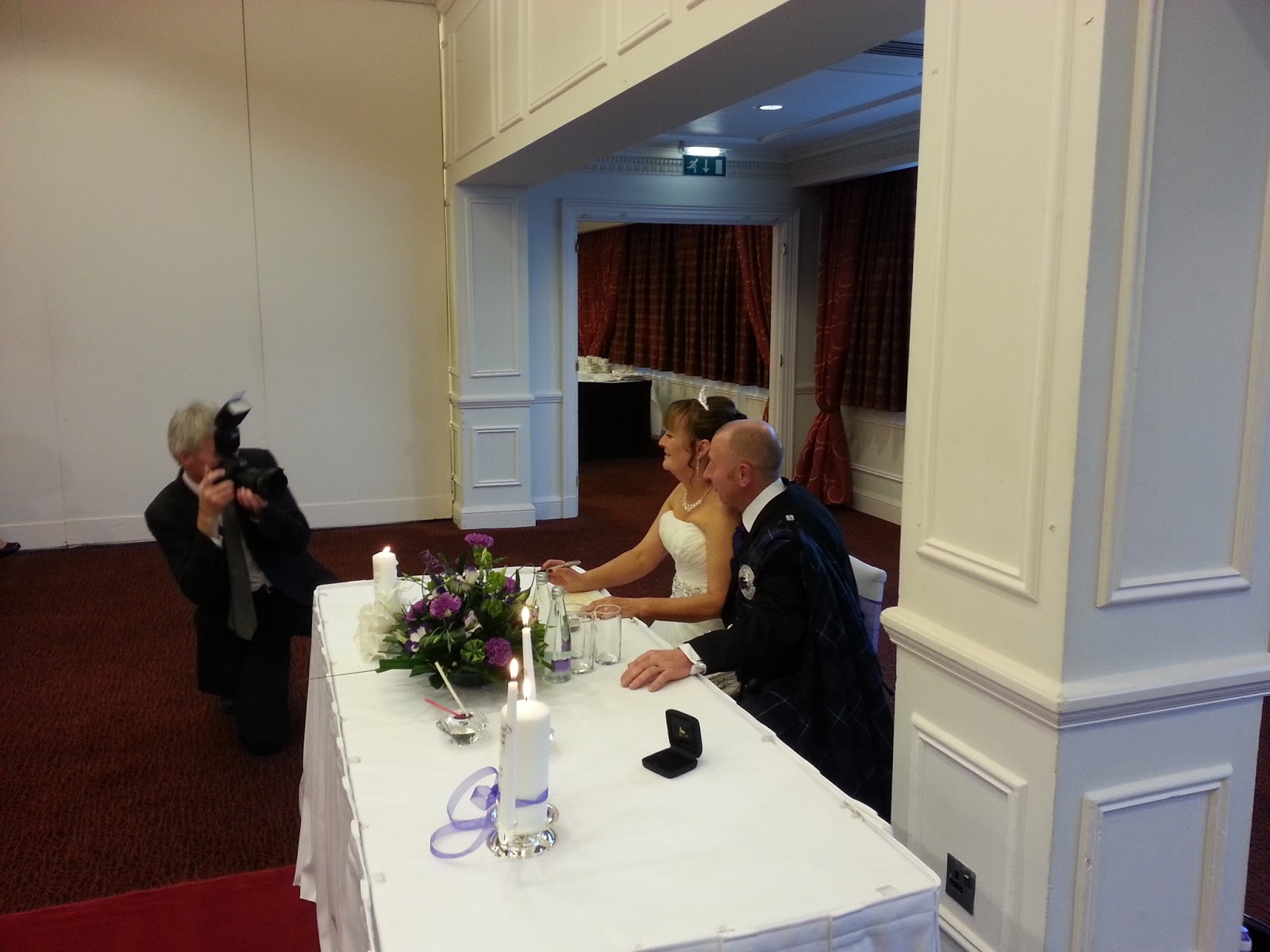 This was a beautiful location at Ardkinglas House  which fitted the bride and groom perfectly.  They had met as both worked teaching violin at the Royal Conservatoire of Music in Glasgow.  It would be of no surprise that it was on a visit to a violin maker who told them he had proposed to his wife after one week as it just felt right.  Despite knowing each other only for a few months, it just felt right so Roland proposed.  He had lost himself in her beautiful eyes when he first saw her.  Apparently all Armenian women have lovely eyes and Ani's are definitely no exception. 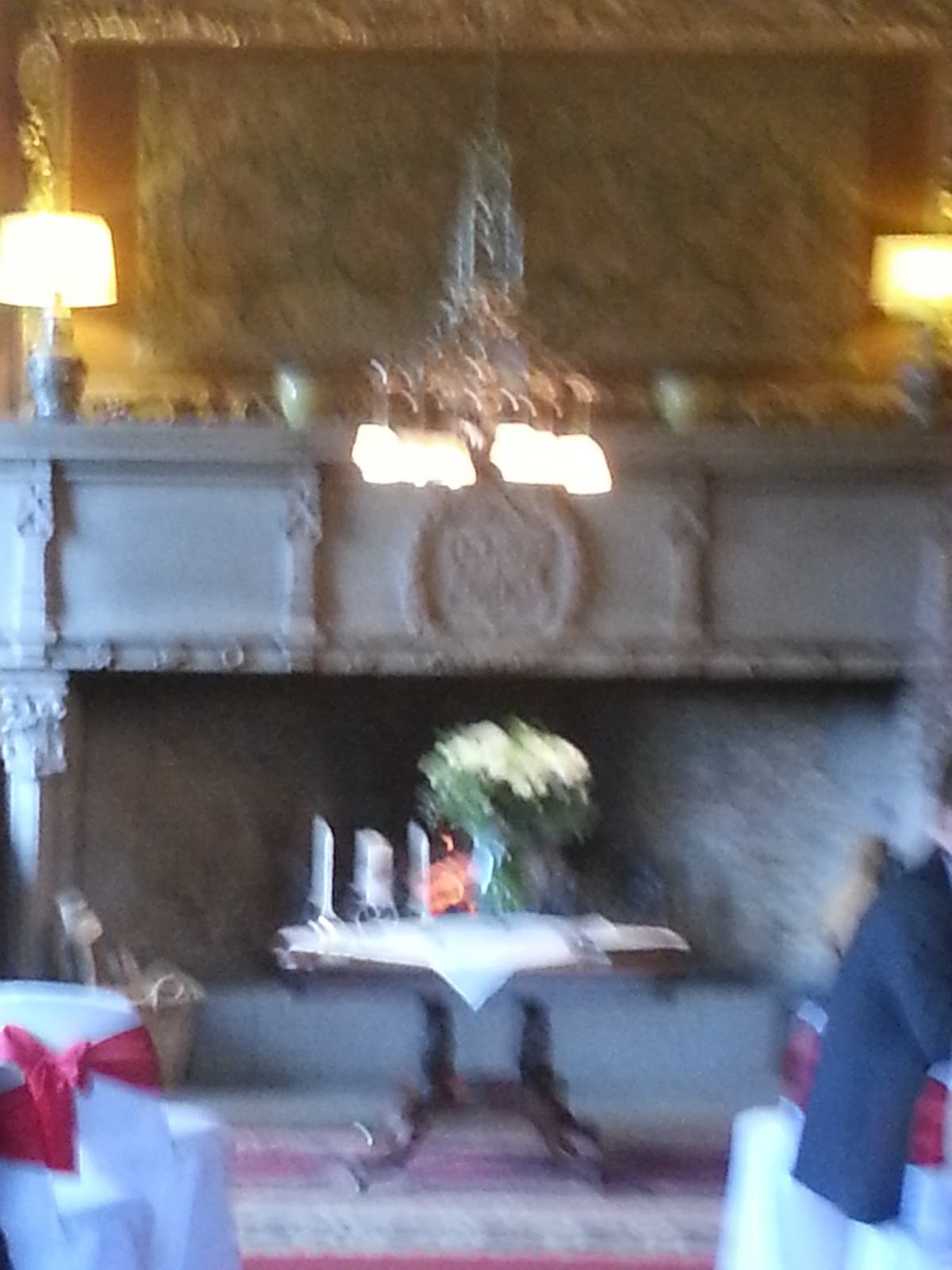 With music and drama within both families, some other members were volunteered to contribute readings which again reflected the couple, which is as they should be.  While we signed the marriage schedule friends performed Robbie Burns "Ca' the Yowes to the Knowes".  We concluded the ceremony with a Celtic Blessing for their future from all of us. 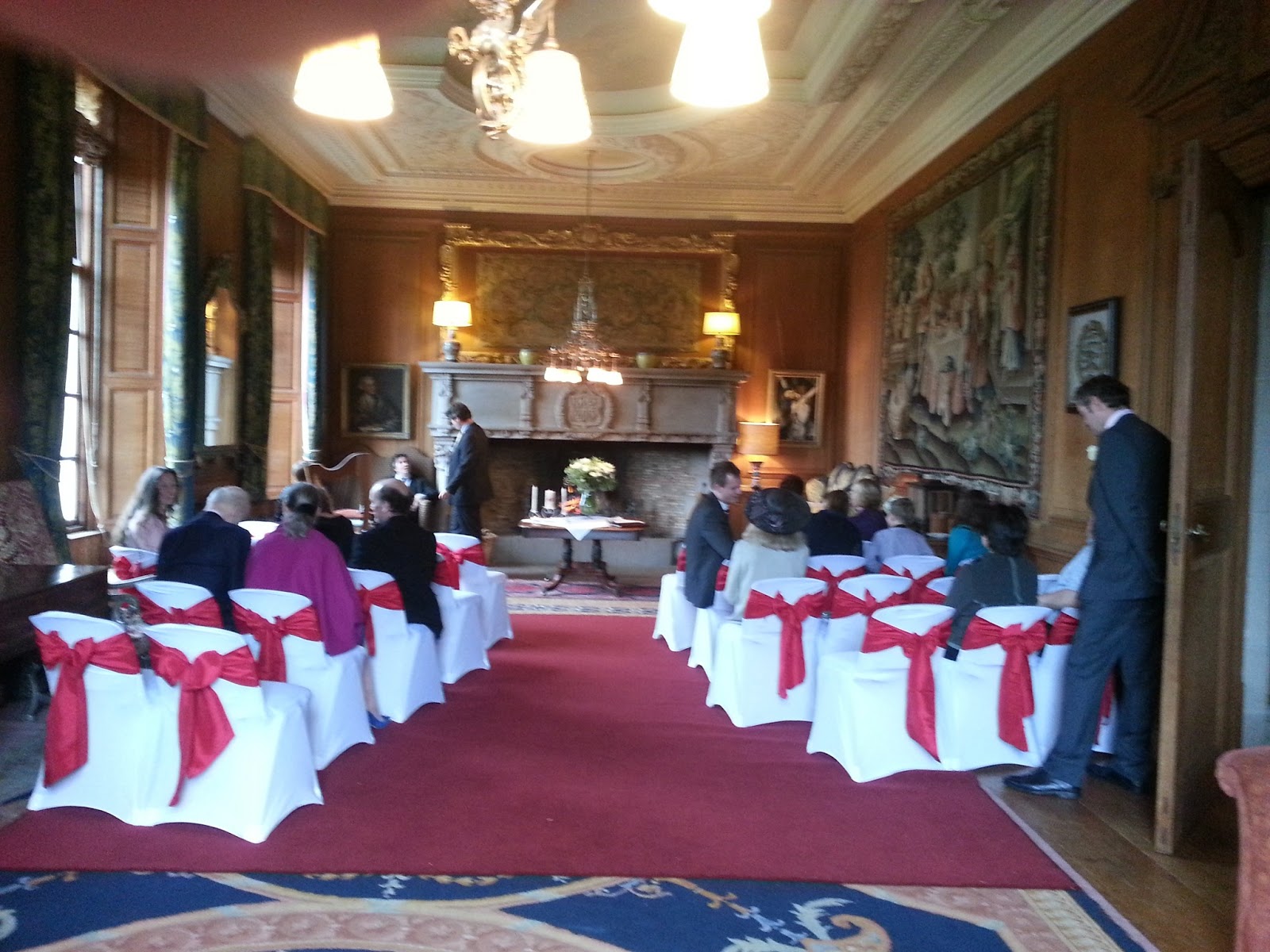 Dear George, Ani and I would like to thank you for the special ceremony yesterday and for being so perfect for us. It was an amazing experience and one we shall always treasure. Thank you again for everything! Best wishes Ani and Roland
Posted by George at 15:12 No comments:

This wedding was held in the beautiful Castle Fraser near Inverurie, another restored National Trust property.  One bonus of arriving early was that I was able to have a quiet moment in the cafe and sample the delicious scones - must curb my enthusiasm or I won't fit my kilt.

Michelle had very definite ideas about her wedding which is great.  Amongst her decisions was that all the guests stood as she entered.  I normally have the guests remain seated as most people when seated are around the same height, so it is easier to see the bride rather than trying to glance between and around others.  It is a matter of choice, as all parts of the wedding are for the couple themselves to decide. 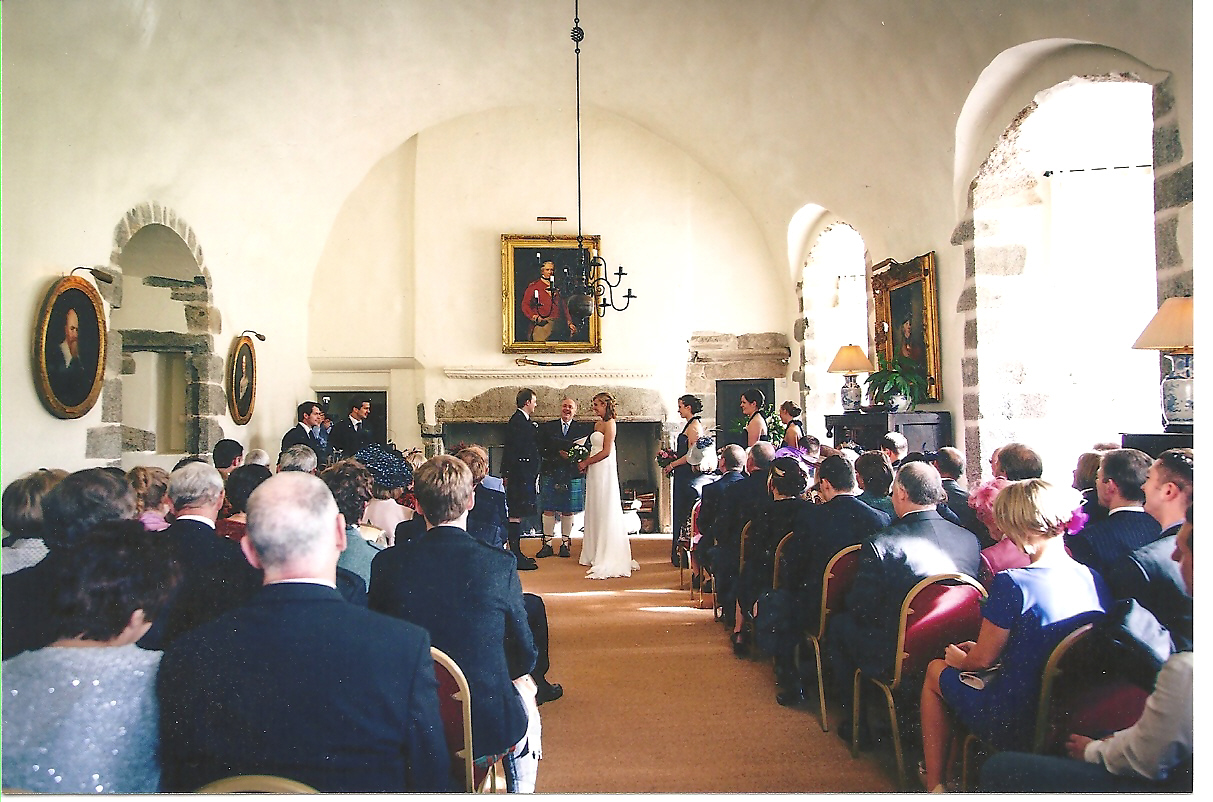 They had met at Stirling University and shall we say first impressions were not good.  It took them six months to actually get to know each other better and from then on things moved at a pace.  Their personal story brought a great deal of fun to the proceedings especially the part about how Craig planned the perfect proposal only to be thwarted by Michelle who never gave him a moment to get the champagne into his rucksack so they had to settle for a bottle of beer by the loch side.  In keeping with having something alcoholic, they drank from the Quaich, the two handed loving cup to celebrate their marriage. 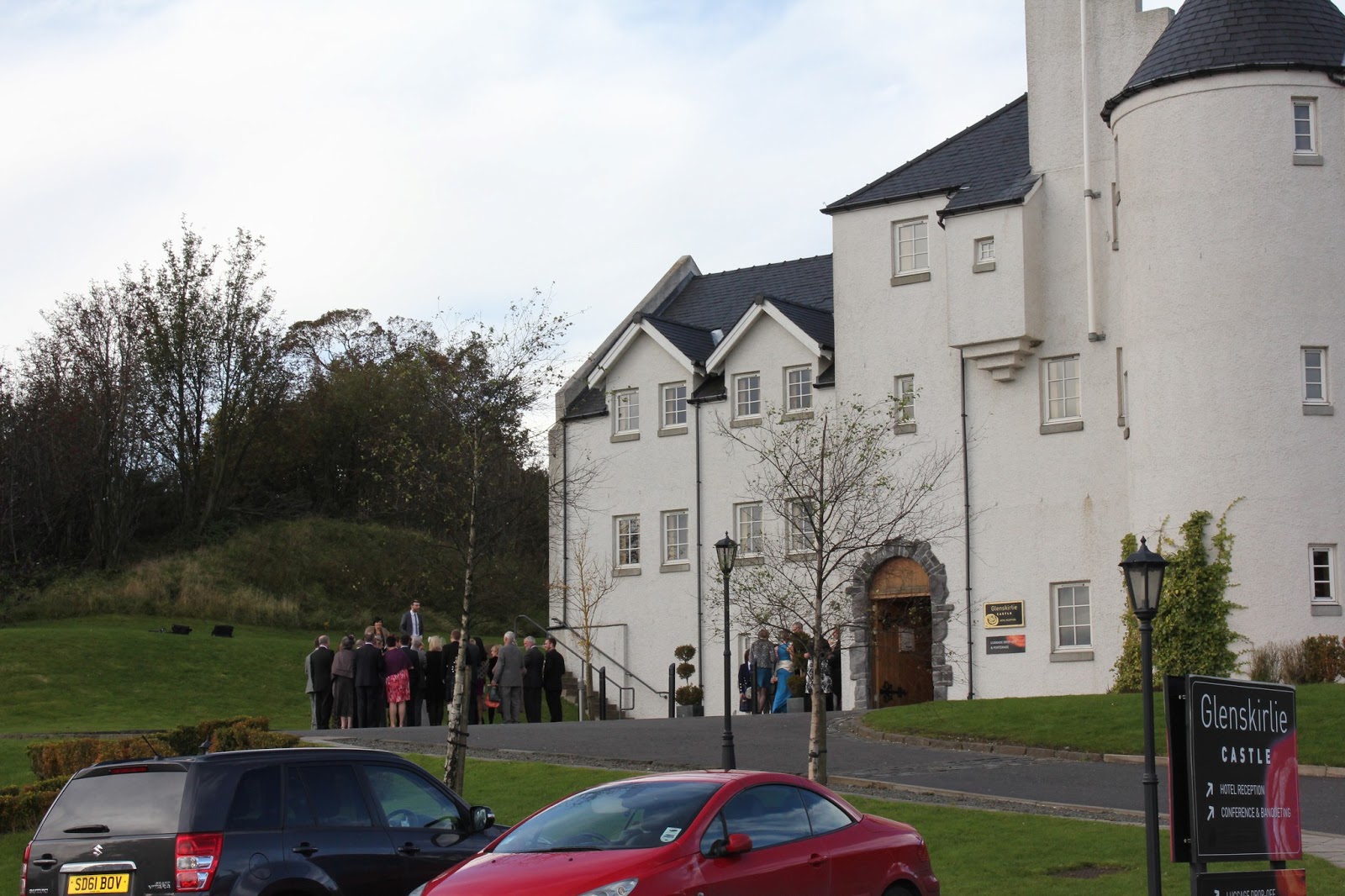 This wedding was held at Glenskirlie House and Castle which according to the sat nav was only a few miles away but given the roads that required to be driven on, it took longer to get their than I expected.  However I always allow plenty of time to arrive early.  The venue itself was warm and inviting so I am sure the guests all enjoyed the celebrations throughout the day.

Gillian and David's wedding was very traditional in structure but still very personal.  Gillian's sister Jennifer read the poem "Love" by Erich Fried translated by Roy Croft which summed their feelings up perfectly. 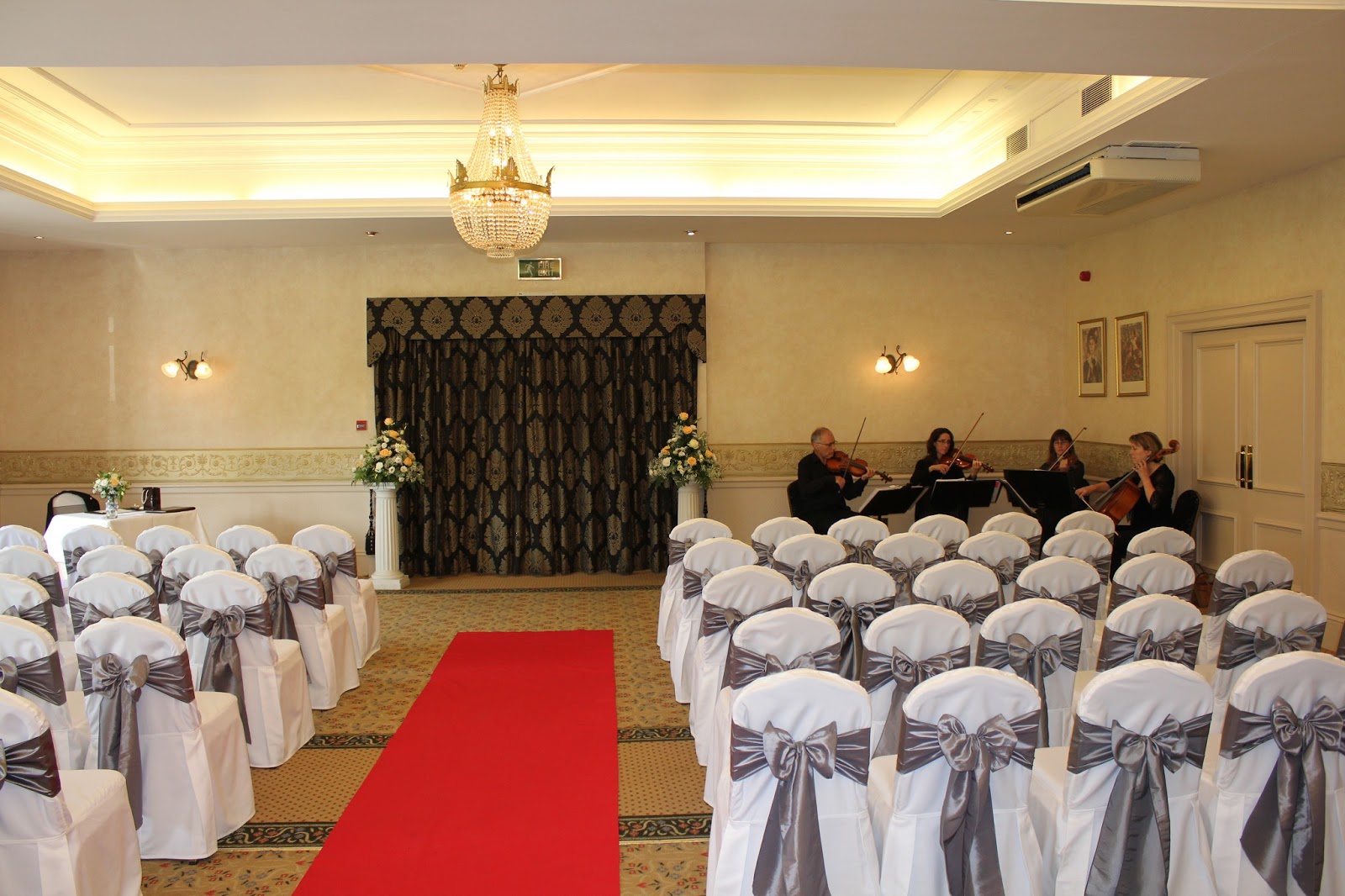 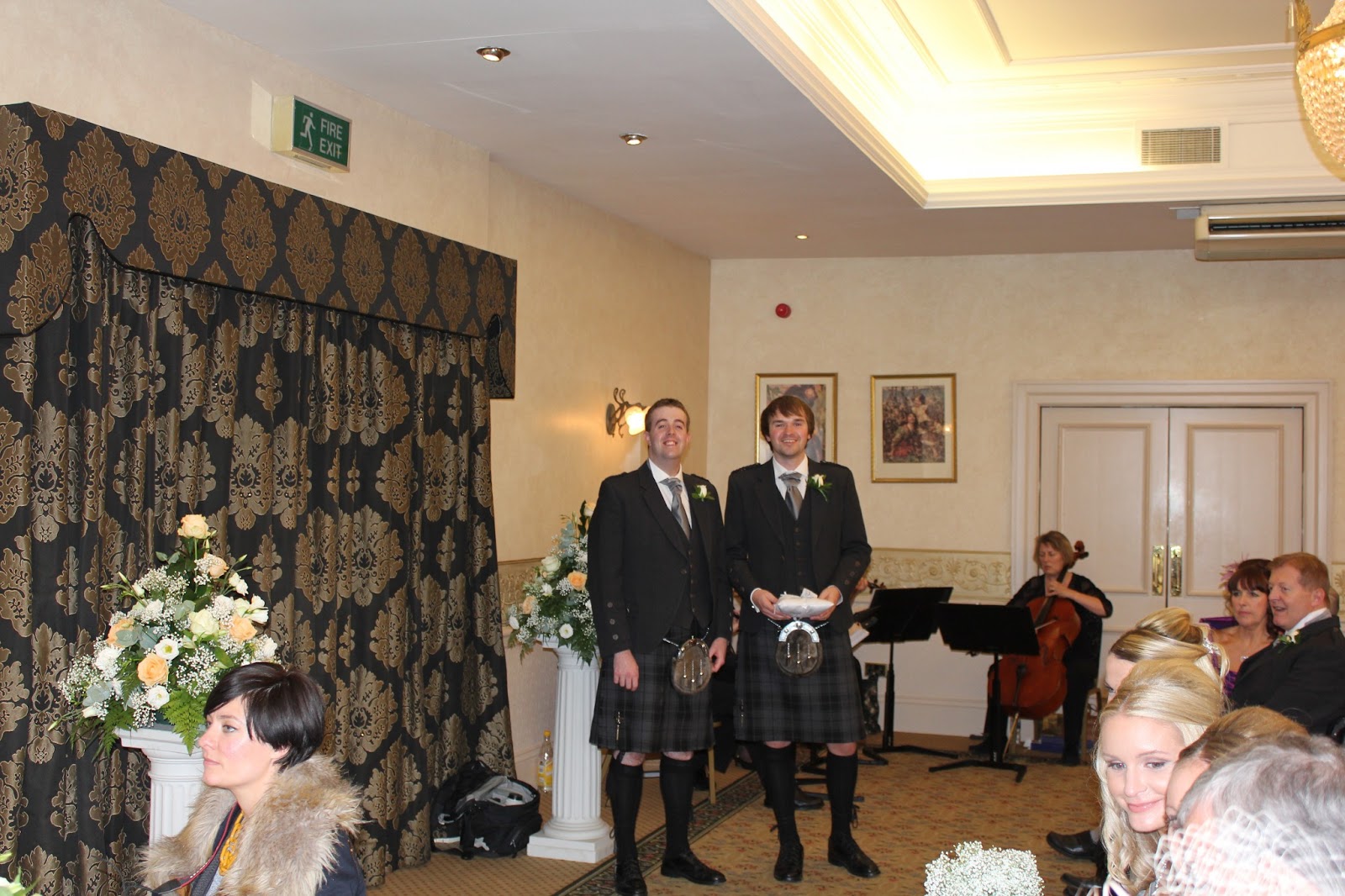 To make of the lumber of my life
Not a tavern but a temple.
Out of the works of my every day
Not a reproach but a song.
You have done it without a touch,
Without a word, without a sign.
You have done it by being yourself.
Perhaps that is what being a friend means, after all.

I thought at first this was to be a very special wedding with big stars (albeit from the world of darts) attending given our groom's surname.  However it was not the famous darts family from Holland.  There were a few introductions within the ceremony which were in Dutch but thankfully, Finn sorted those out with me in advance. 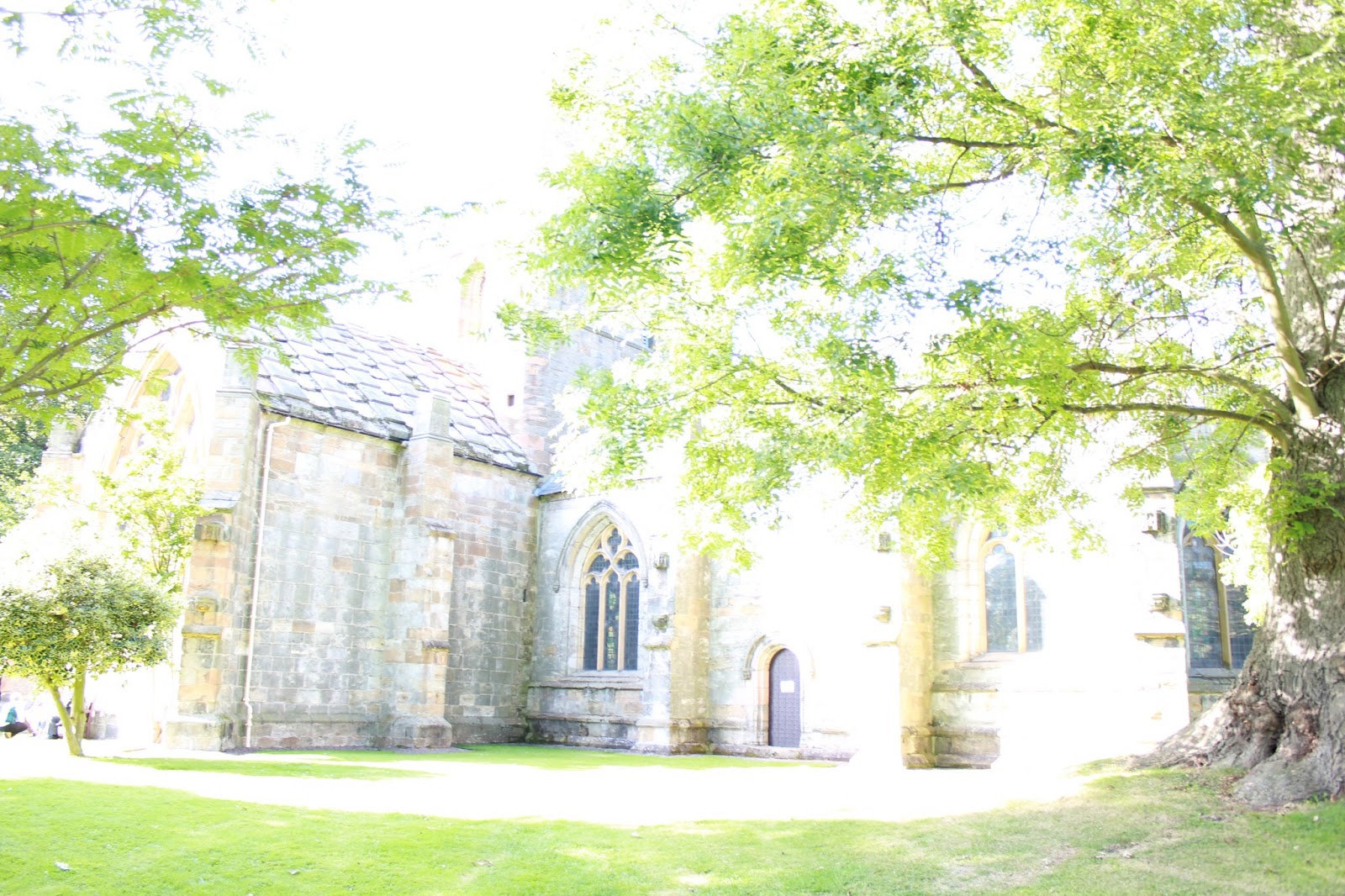 Their wedding was held in the beautiful Historic Scotland setting of Seton Collegiate Church at Port Seaton on the outskirts of Edinburgh.  As the sun shone throughout, it made the venue even more impressive.

One thing which never fails to amaze me is the randomness of circumstances which bring the couples I marry together.  This was an extreme example of this.  With her friend Laura, Claire had gone off to New Zealand to visit her brother and spend some time working there.  Finn, deciding that
he needed a change headed off to New Zealand             without a plan but on first arriving in Auckland bumped into Nick,  his old room mate from university.  The following evening, Claire arrived at the hostel Finn was staying at to  change for a night out.  Unbeknown to either Claire or Finn was that Nick and Laura knew each other so Nick dragged a jet lagged and reluctant Finn out with him to meet Laura and some of her friends.  To say they hit it off together was the understatement of the century. 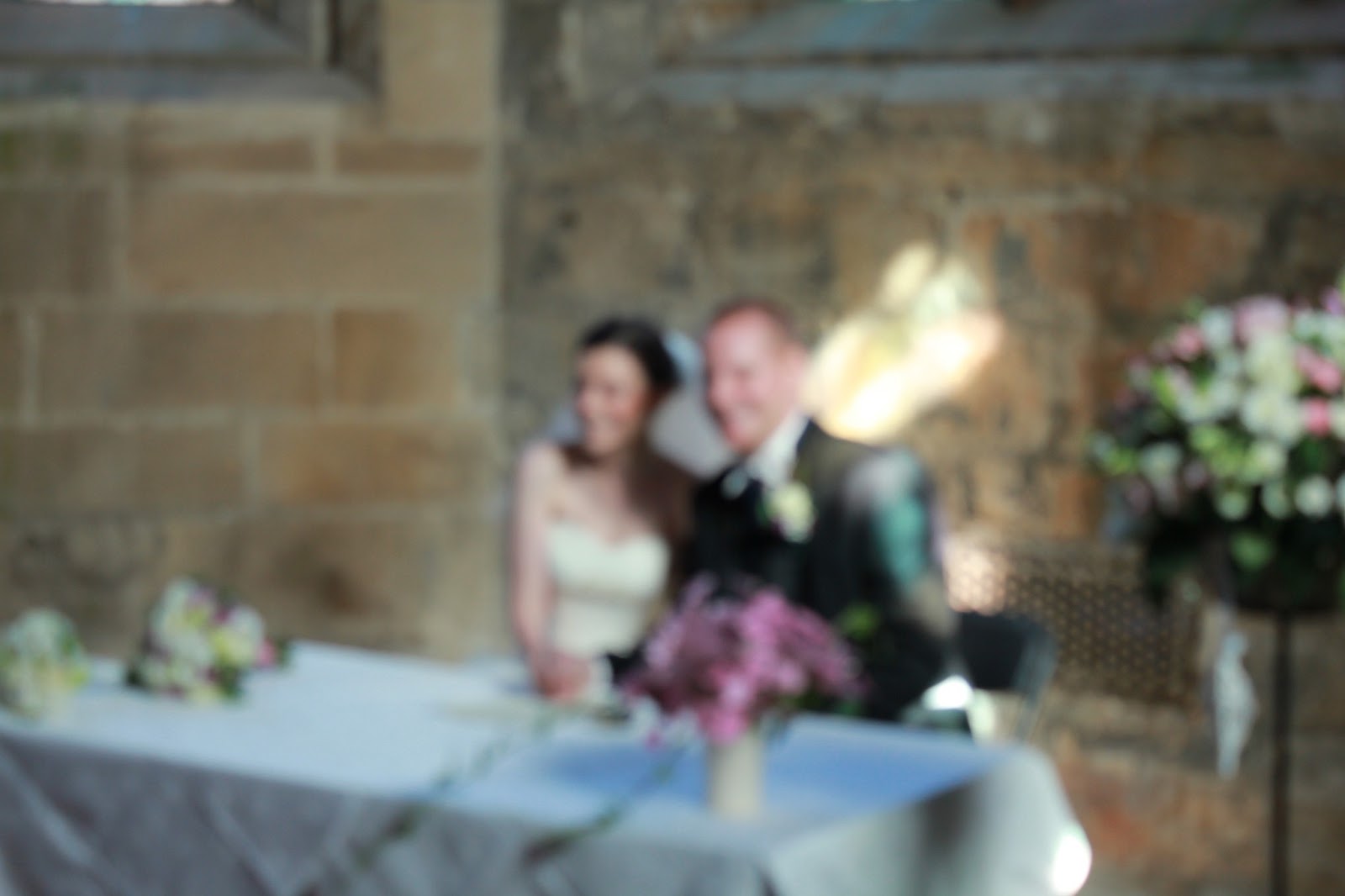 Their personal story within the ceremony brought such a reaction from their guests as it had everyone laughing and almost crying at some of the antics but mostly in awe in their description of their love for each other.

We concluded the ceremony with a poem by Robbie Burns called "By night, by day" which was read by Finn's mum, Sylvia.